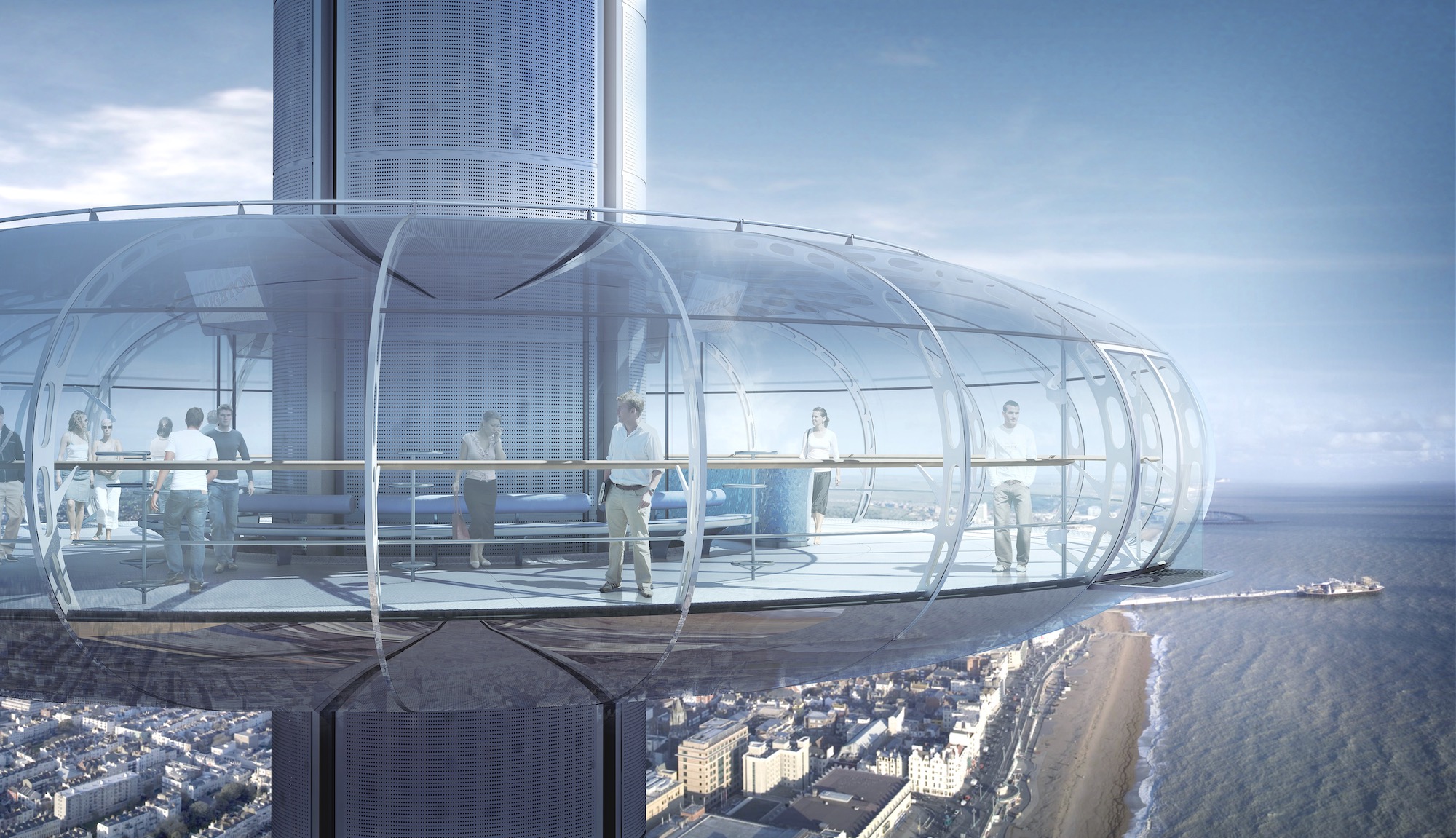 The world’s most slender tall tower, British Airways i360 is a ‘vertical pier’ that redefines the shoreline of the city of Brighton and Hove.

Designed by Marks Barfield Architects, the team responsible for the enormously successful London Eye, British Airways i360 seeks to reinvent the Victorian ‘pleasure pier’ for the 21st century. Located at the entrance to the historic West Pier at Brighton, the project is described by architects David Marks and Julia Barfield as “a modern-day vertical pier, which invites visitors to ‘walk on air’ and gain a new perspective on the city, just as the West Pier invited Victorian society to ‘walk on water.’”

The visually commanding 162-meter-tall tower has a maximum diameter of just 3.9 meters at its widest point, earning it not only the status of the world’s tallest moving observation tower but also the Guinness World Records’ recognition as the world’s most slender tall tower, with a height-to-width ratio of more than 40:1. Encircling the tower is a moveable glass viewing pod, with a capacity of 200 visitors, reaching a viewing level of 138 meters at the apex of its ascent. This affords expansive views over the English Channel, the dramatic Sussex coastline and the rolling hills of the South Downs, with an overall potential viewing distance of up to 42 kilometers.

The 18-meter-diameter oblate-ellipsoid pod is driven by innovative cable-car technology developed by French company Poma, which generates energy during the pod’s descent phase. The tower’s steel cladding is latticed to defuse wind loads and reduce heat expansion by the sun. The pedestal for the structure is formed by a lower esplanade pavilion, housing a 400-seat restaurant and retail areas — and a heritage tea room situated in a reconstruction of an 1866-West-Pier toll booth on the beach’s upper esplanade.

David Marks and Julia Barfield have suggested that the British Airways i360 continues the rich tradition of Brighton’s history of ‘pleasure-architecture,’ reinventing the notion of the Victorian-period seaside entertainment pier for the 21st century. Locally, however, the construction of the tower inevitably was met with some resistance, not least because of the tower’s arguably phallic dominance of the Brighton shoreline and skyline. However, Brighton is no stranger to extroverted architecture. The city’s best-known landmark, the highly eccentric Royal Pavilion, was completed in 1823 as the seaside leisure residence of the Prince Regent and draws on a range of exotic influences. Designed by the architect John Nash — responsible for much of Buckingham Palace and for the town planning of Regency London — the Pavilion is world-renowned for the Picturesque Indo-Saracenic and Oriental aesthetic that has come to both architecturally embody and define the alternative ethos of the city.

Following the enormous success of the London Eye, Marks Barfield Architects had been contacted by various cities wanting to replicate the economic stimulation instigated by the iconic Thames-side landmark. However, after a 13-year gestation period and two years of construction, British Airways i360 emerged as heir-apparent to the London Eye on the shores of Sussex. Brighton’s West Pier had stood in dereliction since its closure in 1975, and was irreparably fire-damaged in 2003. British Airways i360 will redefine not only the architectural character of the immediate vicinity of the West Pier but should also further enhance the already accelerating economy of the broader city.

British Airways i360 is projected to attract 700,000 visitors each year, with each ride taking 20 minutes to ascend during daylight hours, and a more leisurely 30 minutes in the evening, tying in with the transformation of the i360 at night into a Sky Bar. This transformation is coupled with a ‘breathing’ lighting display, described by the architects as “gently increasing and decreasing in intensity at the average rate of a human being breathing at rest.” The lights operate between sunset and midnight. The lighting design by Do-Architecture is mostly concentrated towards the tower’s apex, with four white lights illuminating vertical slots in the tower’s cladding. Additionally, a subtle glow permeates the tower, created by twenty-four colored LEDs positioned between the steel structure and its cladding. David Marks states that “the lighting is designed to be flexible so that the colors and effects can change to reflect events and moments that are important locally, nationally or globally. The lighting can be designed to sparkle, scintillate, shimmer, or glow. The range of possible effects is absolutely brilliant.” 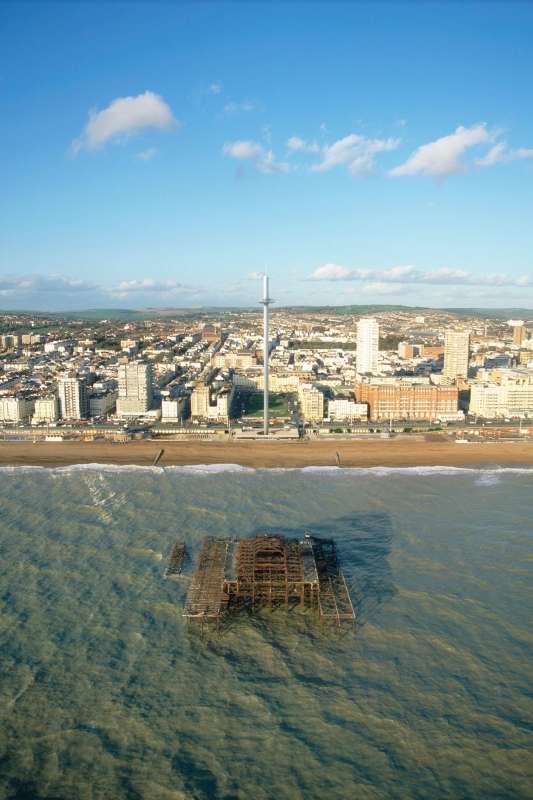 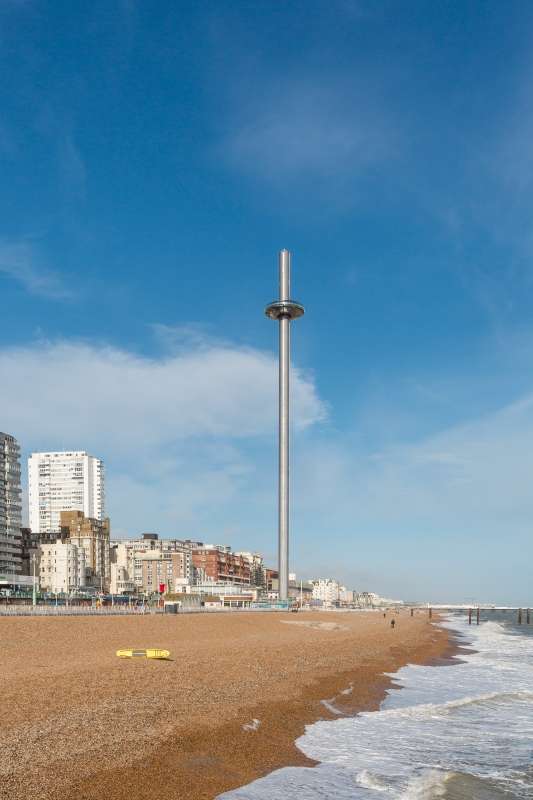 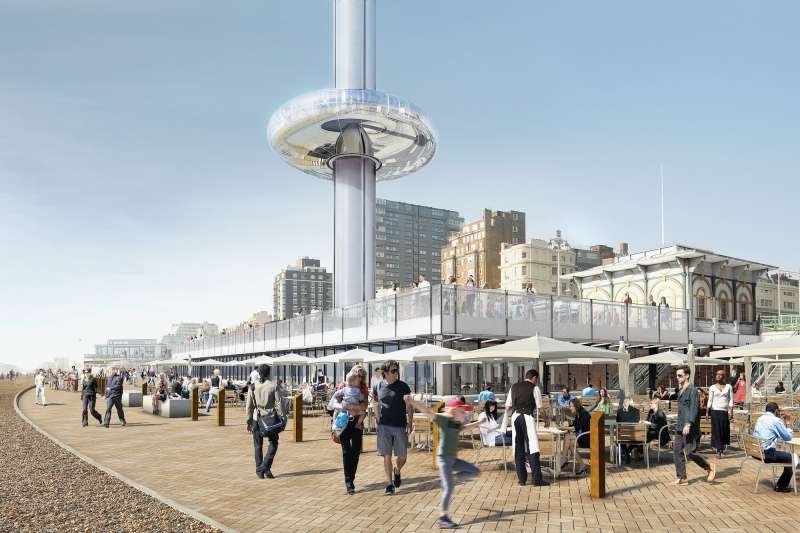 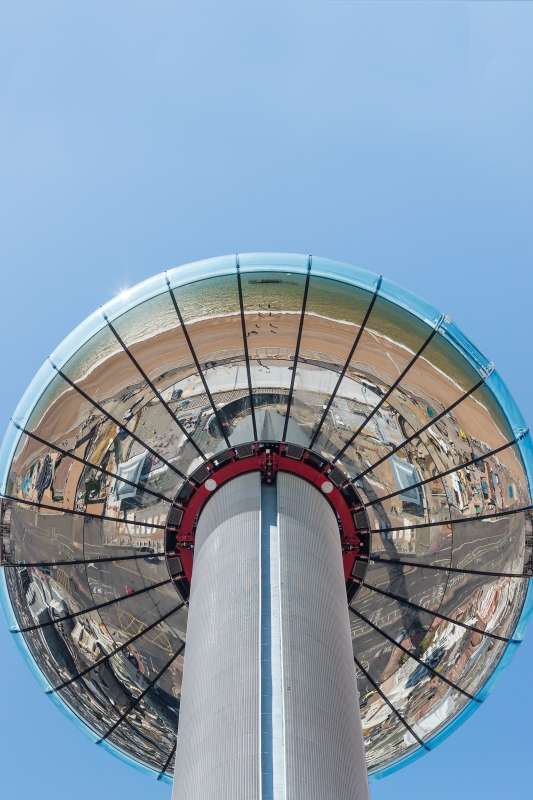 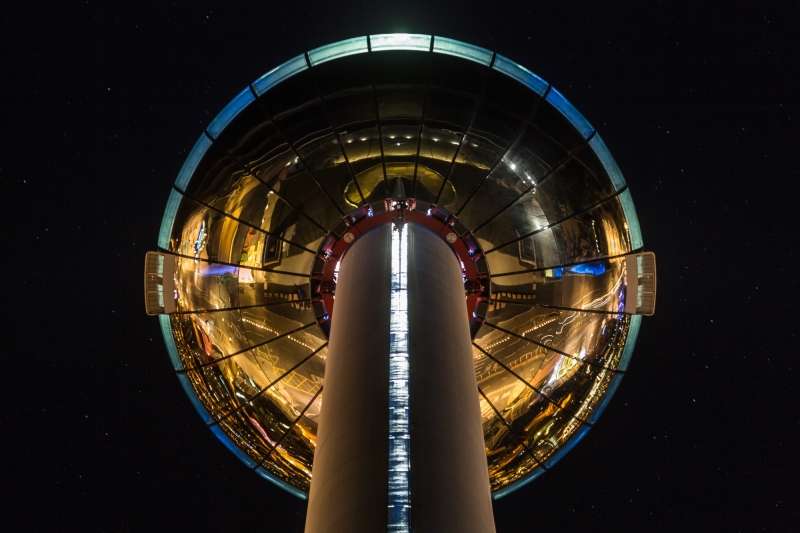 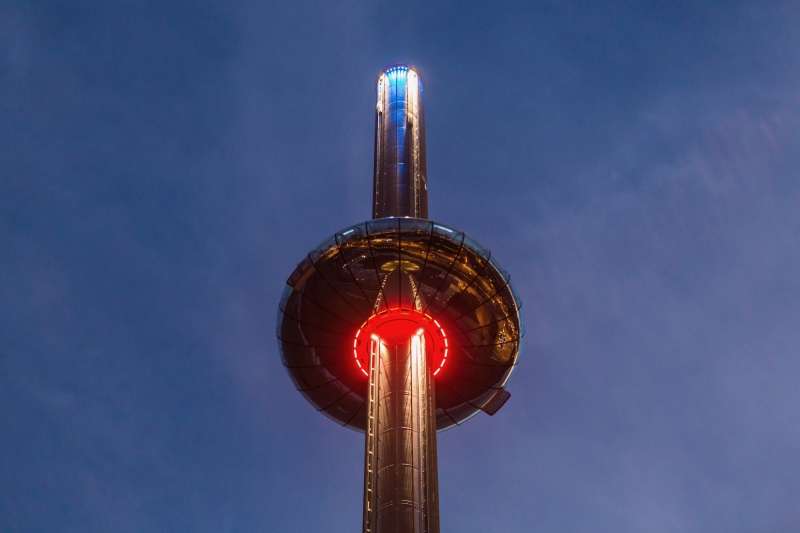 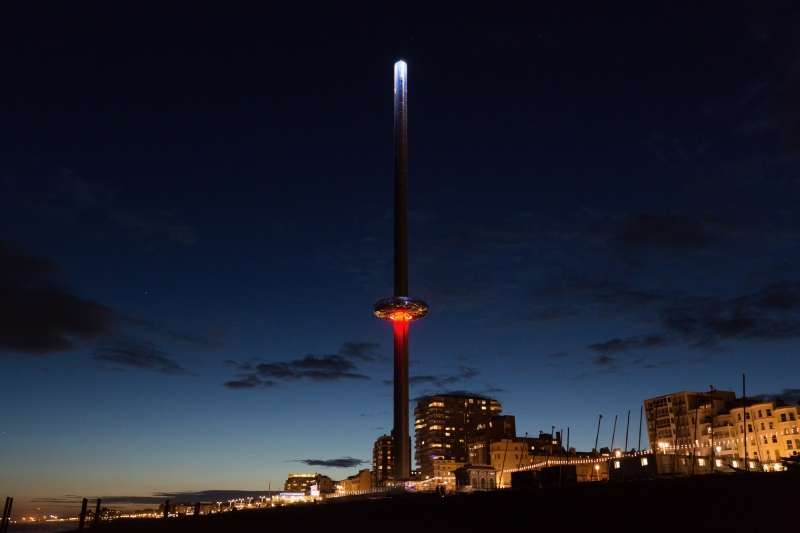