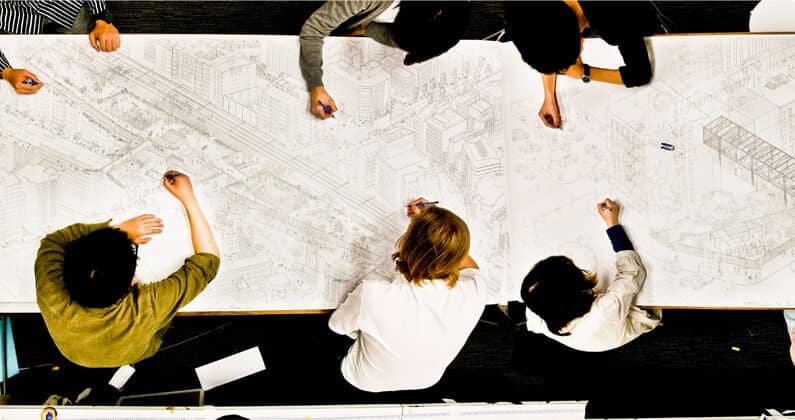 The exhibition was sponsored by Realdania, The Japan Foundation and Danmarks Nationalbanks Jubilæumsfond.

In this exhibition with Japanese architects Atelier Bow-Wow, the Danish Architecture Center showed how to create dense, interesting and human friendly environments in our sustainable cities of the future.

Atelier Bow-Wow is one of the most original architectural offices of our time, and their work continues to inspire architects across the World to design dense urban environments that facilitate human interaction and foster social relations.

Atelier Bow-Wow’s distinctive architecture interprets and involves the city in their buildings in surprising ways. The architects are especially famous for their design of small urban houses fitted into the extreme urban fabric of Tokyo city, where they constantly push the limits between private and public space.

City housing of the future?

How will we live in future cities? When still more people migrate towards cities, and family structures become even more diverse – should we build taller, deeper or maybe smaller? Are we going to need more spatial flexibility? And how should our home be connected to other homes and to the city surrounding us?

The exhibition showed selected works by Japanese Atelier Bow-Wow who is currently attracting global attention. The exhibition focused on Atelier Bow-Wow’s city housings- a discipline that the studio has explored through numerous projects, each of them pushing the boundaries of how to build and live in contemporary cities. We hoped to inspire architects and citizens outside of Japan to denser, more diverse, and perhaps more fun ways of living in future cities.

Atelier Bow-Wow’s architecture and thinking stems from Tokyo. The Japanese capital has been coping with extreme population density throughout centuries – Tokyo reached a million inhabitants in the 18th century, when the population of Copenhagen came to roughly 70.000 people.

The high  prices on land in Japan combined with overwhelming taxes on inherited land often forces heirs to divide and sell parts of their inherited land. As the building sites become smaller, the land is exploited to the limit, and the peculiar shape of a building site directly determines the architecture on it. The house adapts to its surroundings and seeks daylight and views where possible.

Atelier Bow-Wow calls this urban ecology; the building is formed to fit a specific habitat. The residents make use of every inch, and sometimes even include a part of the sidewalk by stacking potted plants in ‘shelved gardens’, creating a green transitional zone between private and public spaces.

Like many other Japanese architects, Atelier Bow-Wow is critical of the influence of Western modernism which has – in their opinion – isolated people from one another and the individual house from the city.

Atelier Bow-Wow seeks to reconnect the individual house to the common sphere of the city and to combine housing with other functions. These are all principles of traditional Japanese architecture, but they have been neglected because of the focus on segregated functions and the nuclear family that was dominant throughout the 20th century.

Atelier Bow-Wow reinvents the traditional Japanese townhouse Machiya as a new type of housing. In a Japanese context this can be seen as both preservative and visionary – and to the Western eye it seems radically inventive.

Perhaps we have something to learn from the mindset of Atelier Bow-Wow? Even if Tokyo is completely unique in an architectural sense, Atelier Bow-Wow’s experimental and unorthodox play with shapes, functions and limits does ask the question if in the future we too can imagine and build city houses that are entirely differently from the ones we know today.