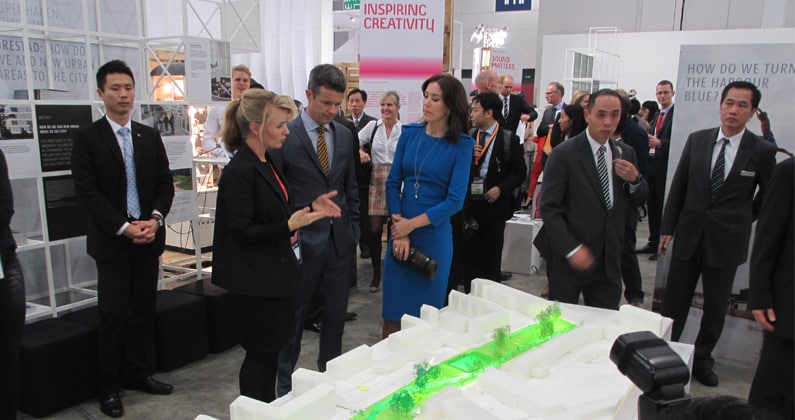 Hong Kong Business of Design Week (HKBoDW) 2012 was Asia’s largest and most prestigious design event. It was a meeting place for more than 100,000 people who work professionally with design. Denmark is a partner nation for HKBoDW 2012, which was held on 3-8 December 2012.The purpose of Denmark’s involvement in HKBoDW was to ensure a sustainable future platform that Danish designers, architects and companies can use as a basis for successful business ventures in China and Southeast Asia.

“Copenhagen, the capital of Denmark, is internationally recognized for its green profile as well as its leadership and excellence within the field of integrated urban solutions. For decades these solutions have promoted a high degree of liveability, healthy environments and general economic prosperity in this Scandinavian capital.” says Frank Jensen, Lord Mayor, City of Copenhagen

The City of Copenhagen wants to become the first carbon neutral capital in the world by 2025. And Copenhagen is already well on its way. Providing the city with integrated transportation systems has reduced traffic congestion and pollution to levels that are extremely low compared to many other big cities. One indication of this is that the number of car trips within the central part of Copenhagen fell from 350,000 in 1970 to 284,000 in 2012.

Demonstrating Copenhagen’s many sustainable initiatives, the contribution to the Business of Design Week 2012, Copenhagen Solutions, offered inspiration to policy makers, developers and architects worldwide. With its extensive and efficient district heating network, bridges only for cyclists and pedestrians and an ambitious Climate Action Plan, Copenhagen is a good place to look for inspiration when it comes to creating greener cities.

At the Business of Design Week 2012 a partnership between the City of Copenhagen, Realdania and the Danish Architecture Center presented a wide range of initiatives and projects that are transforming Copenhagen. Among them are revitalization of old industrial areas, new urban areas full of innovative architecture and sustainable district heating and cooling.

“A cluster of Danish and international planners, architects, engineers, manufacturers, contractors, investors and the city council have turned Copenhagen into a high performing global leader within the development of systemic sustainable urban solutions and by showcasing the best solutions it is our hope that we can serve as an inspiration  for other cities”, says Realdania’s CEO, Flemming Borreskov.