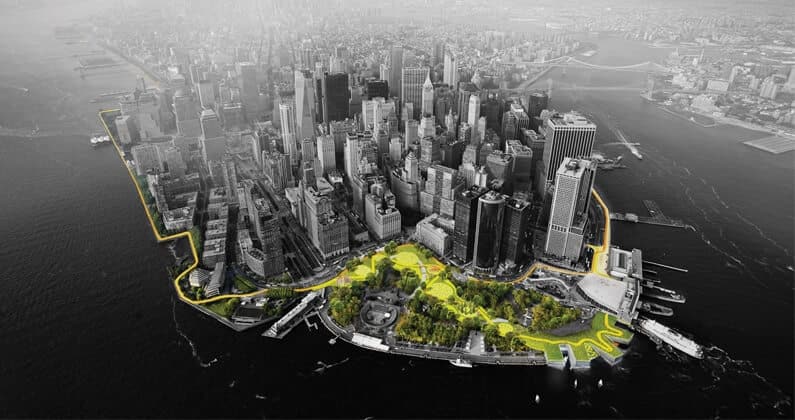 Photo: The BIG Team/Rebuild By Design

developed by  Rebuild by Design in cooperation with The Danish Architecture Center.

The exhibition was supported by Realdania

On October 29, 2012, hurricane Sandy landed on the American East Coast and left behind chaos and destruction. “Rebuild by Design” was a response to this – a competition created to find solutions to repairing the damages and making the coastline more resilient to future storms. The exhibition “Rebuild by Design” presented the resulting 10 solutions. Among the winning projects were OMA and Danish firm BIG who both had innovative solutions to making the coast a safer place to live.

Many of us remember the images of Manhattan laid dark, the subway tunnels filling with water, the thousands of homes and cars destroyed and people being evacuated. The winning projects of “Rebuild by Design“ wish to make sure that something like this can never happen again. The exhibition at the Danish Architecture Center highlighted their ideas. After the competition had ended, six projects were awarded $920 million to turn their ideas into reality.

Among the winning projects were Danish architecture firm BIG who – in collaboration with a number of partners – won with ‘Big U’. The idea of the project is to create a protective system around Manhattan by building a number of berms that can also be used as recreational spaces in the city. American-Dutch architecture firm OMA (who is also behind the ongoing Bryghus Project in Copenhagen) won with a project whose aim is to protect The Jersey Shore. Their project presents us with four ways of handling water: resist, delay, store, and discharge. Eight more projects were part of the exhibition, among them the four other winners.

“Rebuild by Design” was showed at the same time as the big exhibition ‘Rain is coming – how climate change adaptation can create better cities’ on Level 1. It gave us an international perspective on how to adapt our cities to climate change.