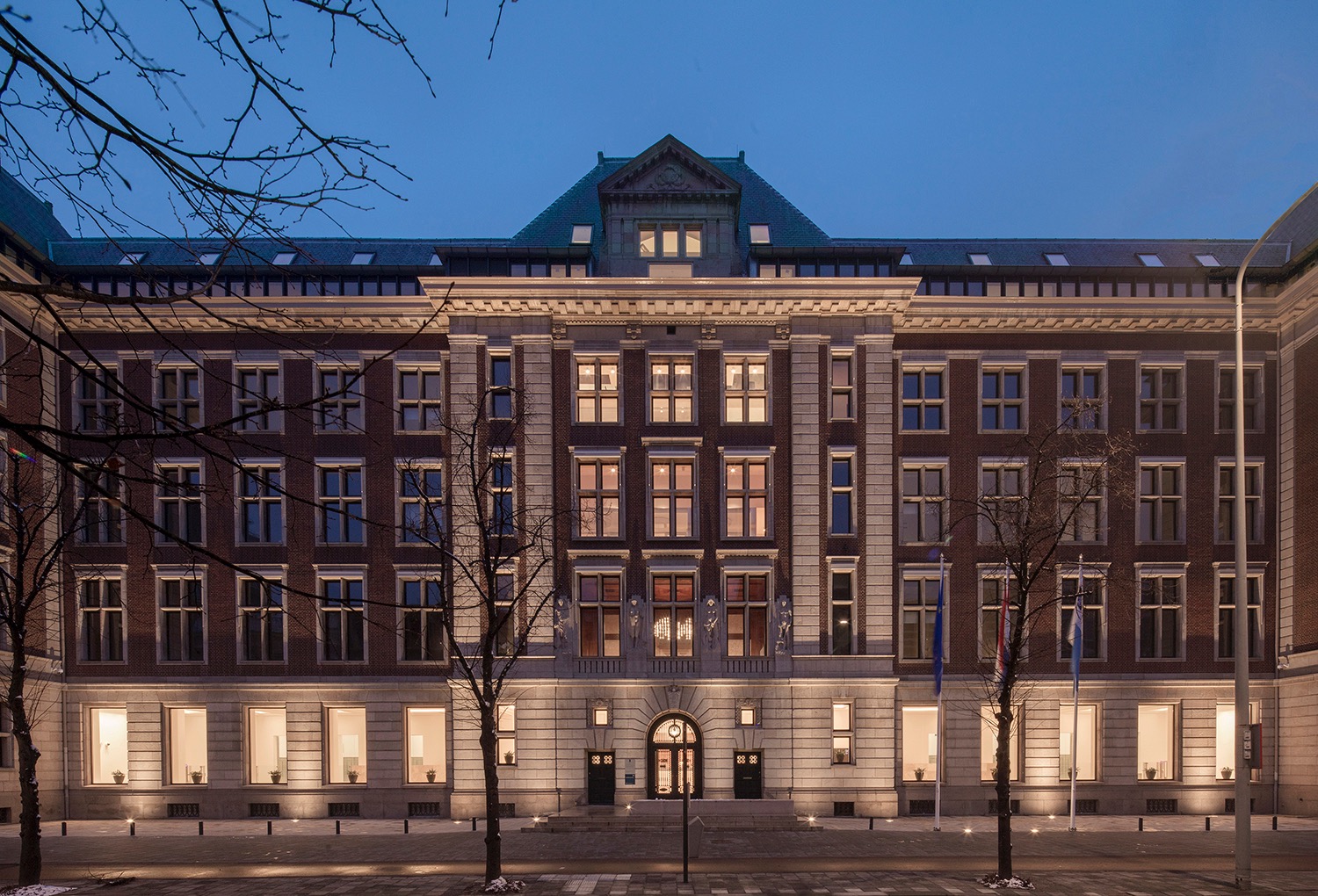 Sited on the historic arterial route of Bezuidenhoutseweg, from which it gets its name, the B30 (Bezuidenhoutseweg 30) has a commanding street presence in the center of The Hague.

An imposing structure with a distinct architectural character, this Grade 1 heritage-listed building was originally constructed in 1917, designed by the then-chief government architect Daniel EC Knuttel. The challenge for KAAN Architecten was to transform this neoclassical ministerial building — reflecting the austerity and hierarchical government of the time in its enclosed, compartmentalized plan — into a well-functioning contemporary workplace.

While the exterior maintains the monumentality and solidity of the historic façade — emblematic of the early-20th-century authoritarian state — the interior gives way to a series of open, transparent and inviting spaces. The bright, airy expansions are carefully interwoven with the existing mass to create a new, clearly defined and unified complex.

The renovation houses the Dutch government’s new knowledge center, comprised of five separate organizations. KAAN Architecten has transformed the structure into a ‘state-of-the-art’ working space for its various tenants, characterized by transparent and generous spaces that encourage and nurture practices of collaboration, interaction, and debate.

B30 now gives space to contemporary ideas regarding government transparency. A spatial expression of a shared vision that will inspire curiosity and invite research and debate.
— KAAN Architecten

The ground floor serves as a ‘public arena’, an accessible and transparent shared space between the various tenants and the public, containing a café, library, auditorium, meeting and seminar rooms. This open ground floor is subtly expressed through the façade, with slightly enlarged openings that are given a different formal treatment than the upper levels. The ground-floor passageways all align to create direct sightlines between the street, gardens, and forest, bringing B30’s diverse surrounding context deep within the interior, as well as simplifying orientation and wayfinding.

A generous five-story atrium sits at the plan’s center, flooding the adjoining spaces with light and visually connecting the various levels. The void frames a specially commissioned mosaic on the ground floor by Dutch artist Rob Birza, contemporary in its vibrancy and graphic quality while embedded in classical geometries.

These sympathetic yet contemporary interventions continue throughout the renovation. For KAAN the existing building fabric was not a ‘dead museum piece’ that had to be worked on, but a vital and living part of the design, a framework to work with and in response to. The architects conducted a thorough analysis of the building, mapping out its essential qualities in order to intervene in a sensitive and meaningful manner. The renovation which has resulted is a quiet contemporary one, that sits consciously and in conversation with the original building. The interior façade surrounding the central atrium is made up of a series of arched openings that align with the structure, classical in form but contemporary in its detailing. The skylights in both the atrium and foyers are faceted, sculptural forms which take from the original ubiquitous coffered ceilings (positioned for optimal dispersion of light while preventing overheating); the new façade matches the tones of the original building, but is made of sandblasted concrete frames filled with stone. 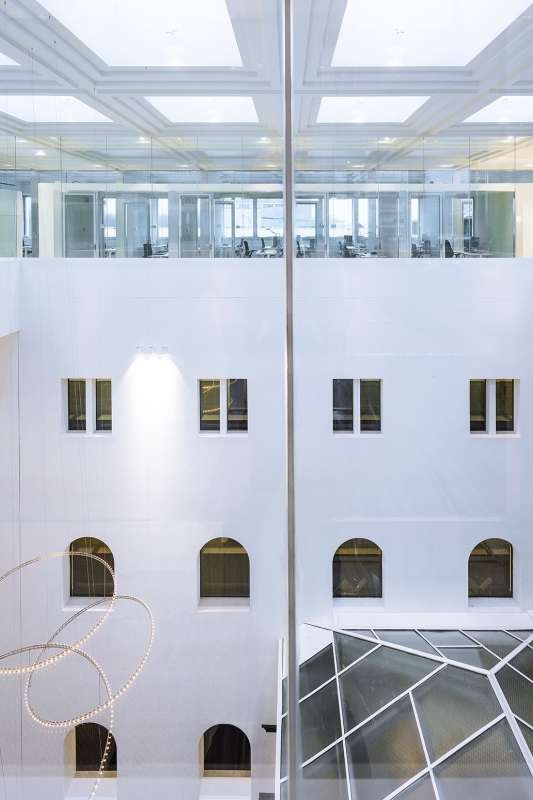 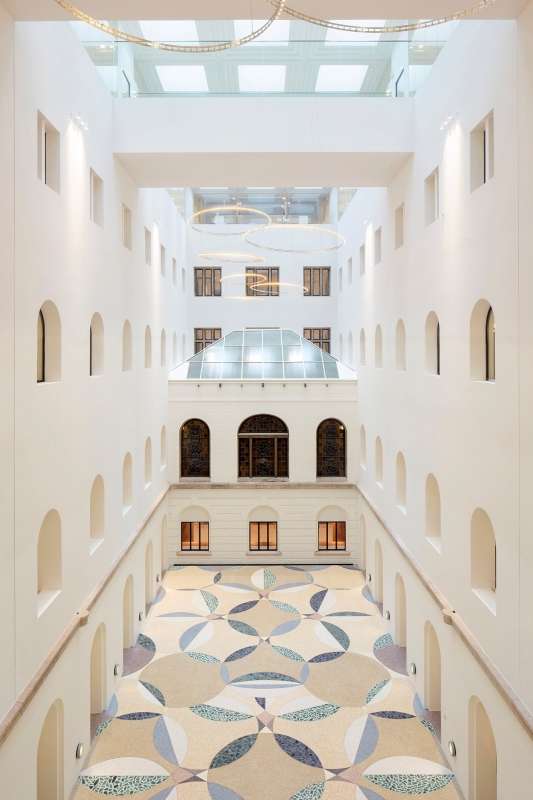 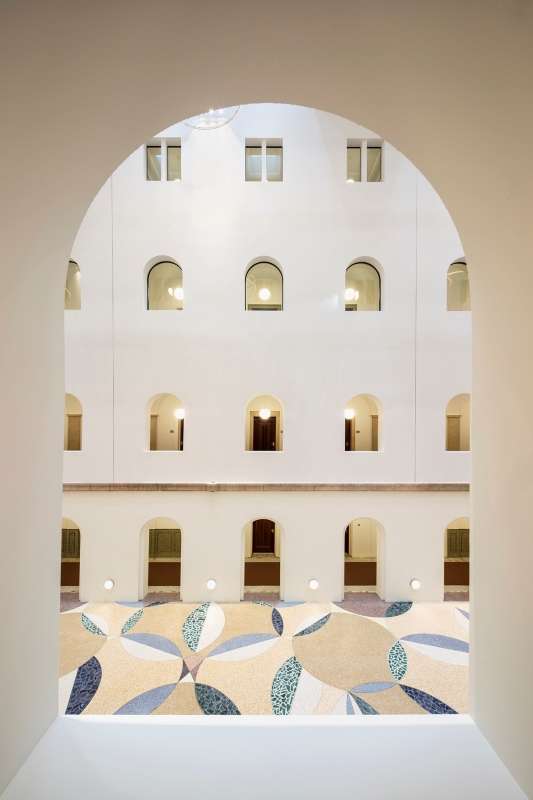 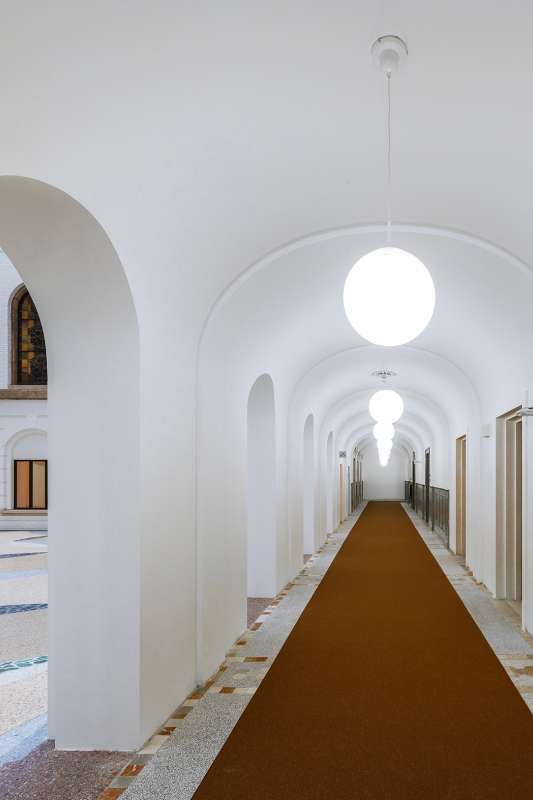 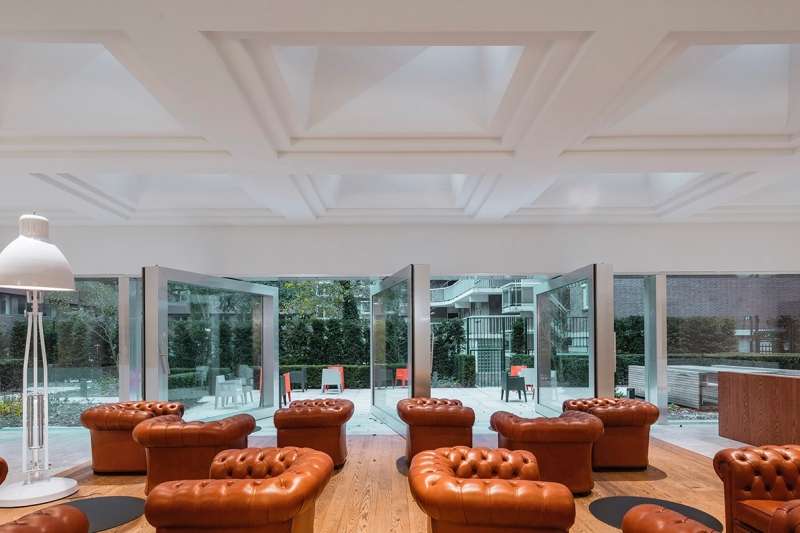 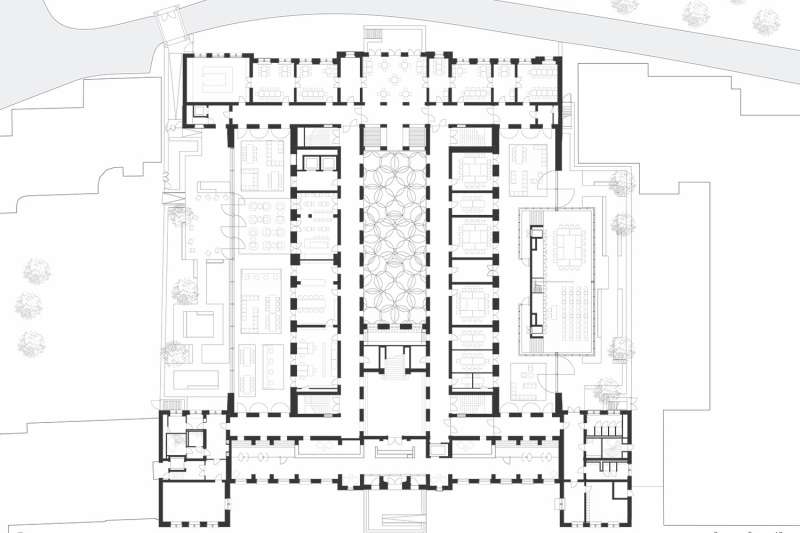 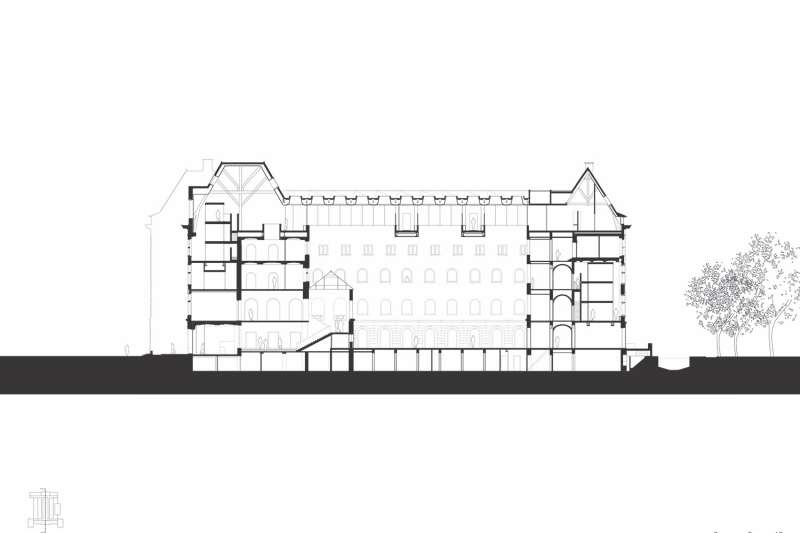