The prize, established in 1978 by the Concrete Element Association, is awarded for excellence in design and the integration of prefabricated concrete elements with other building materials.

The white-painted concrete columns and girders, in contrast to the soft organic form of the “Monolith Theater”, stand out as architectural elements revealing the rhythm of the building’s structural system.

The rectangular box clad in black granite, surrounded by pools of water and greenery, stands out in the otherwise bland industrial neighborhood. The main entrance is reached by crossing a bridge over a minimalist water garden planted with slender trees.

Architecturally the design concept takes advantage of the sloping site; the main entrance, situated at the highest point, anchors the building to the ground, and the backside of the building floats above the reflecting pool that surrounds the lower-level canteen like a wall-to-wall carpet.

The interior of the building — a figure eight in plan — is designed with all the virtues of a classical town: the arrival, the town plaza, the different neighborhoods, the parks, and lakes.

In the center of the “Plaza”, a gigantic organic poured-on-site concrete sculpture — the “Monolith Theater” — rises through the full height of the building and the roof, letting daylight in around its curving edges. The frieze, inspired by CCI’s background as printers, is by Danish artist Jens Formsgaard.

The “Plaza”, with its gigantic staircase reminiscent of the Spanish Steps in Rome, is surrounded by “neighborhoods” with streets, alleyways and bridges on three levels. In contrast to the organic form of the “Monolith Theater” the offices, placed around the two communal areas, are straightforward and economical in their construction. The offices, accessed via interior staircases, balconies, and bridges, all have exterior views.

Narrow strips of skylights around the curved form of the Theater and on the edges of the “Plaza” create a play of light and shadow that, combined with the blond wood, glass, and Arne Jacobsen chairs, give the Atrium an inviting ambiance with a Northern European flavor.

The 200 seat “Monolith Theater”, with the main entrance on the ground level, is used for in-house or client presentations. On the upper level, bridges across the “Plaza” lead to private meeting rooms.

In the exterior atrium, on a sloping hill covered in steel blue stones, the “Garden” is planted with pine trees and blueberries in true Nordic garden style.

The Concrete Element prize is a coveted prize for emerging designers, as the prize often is used as an “investment in talent” to encourage and support young architects. 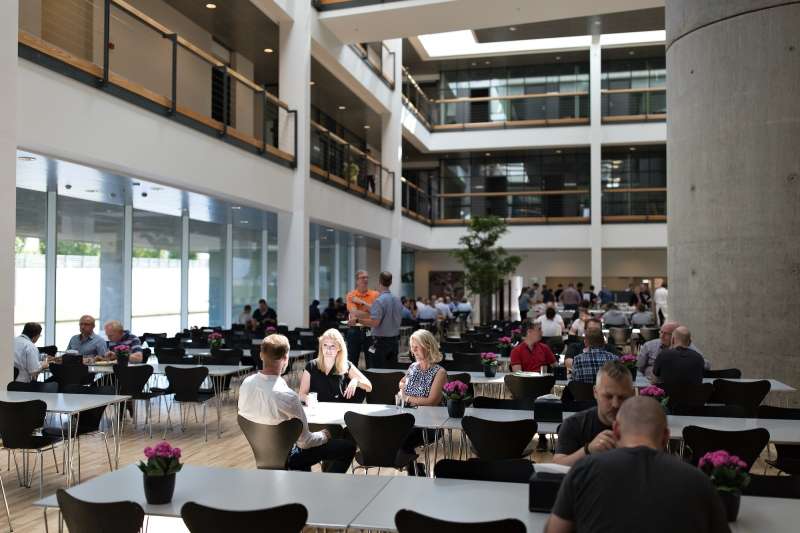