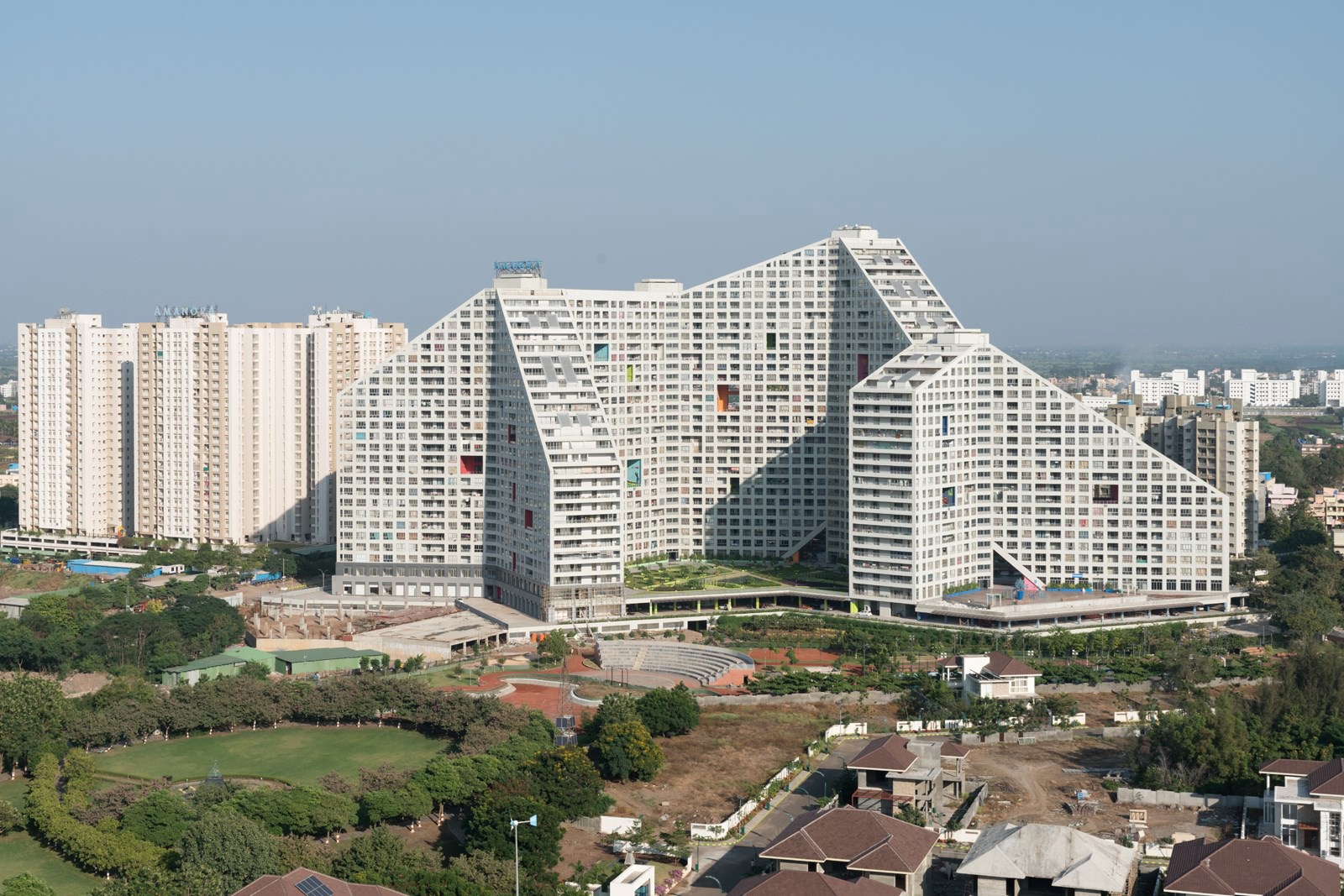 Sited in Pune, one of the fastest growing cities in India, Future Towers by MVRDV provides a compelling case for architecture’s renewed agency within the rapidly growing megacities of the developing world.

As an office, MVRDV has always been preoccupied with the design of housing. Many of the practice’s earlier works explore the potential for housing projects to deliver more than just an expedient response to a brief — instead fostering a sense of community and local identity, often through an unorthodox yet pragmatic approach — a combination of material experimentation, formal gymnastics, and unconventional programmatic combinations. Perhaps the best example of this prior to Future Towers is the Mirador Building in Madrid. Taking the typical city block and rotating it 90 degrees vertically, Mirador forms a stack of varied apartment types into a vertical neighborhood-oriented around a public sky-plaza – a vast communal space that gives a view of Madrid’s downtown area and provides a communal focal point. Fast forward over a decade from Mirador, Future Towers represents perhaps the most ambitious, and certainly the biggest, exploration of these ideas in a finished building.

In plan, Future Towers comprises a series of monolithic apartment slabs arranged in a hexagonal grid. This has the dual effect of orienting housing units to large, horizontal views and plentiful daylight while creating a series of large-scale, open courtyards open to the city at ground level. More pragmatically, this arrangement consolidates elevator shafts into the triangular nodes between the apartment slabs, reducing the cost of vertical transportation for the entire complex.

In elevation, the grid of apartment slabs has been cut diagonally to allow for daylight and to relate better to the scale of the surrounding city. These diagonal cuts create a series of communal and private terraces but also knit the geometry of the complex together in a single, cohesive formal gesture. The effect is of a playful, almost natural structure – a stark contrast to the repetitive vertical blocks surrounding it.

The façade of each apartment slab is divided by the same repetitive grid pattern, which gives structure to the expression of the building but also allows for a certain amount of complexity to creep in. Each apartment has a recessed balcony to allow for shade and privacy, but due to the number of different apartment types, the grid allows for the visible expression of the variable apartment types behind, with single-height, double-height, and double-width balconies.

This pattern is further punctuated by a series of brightly colored, large-scale, communal openings known as ‘scoops’. This double-, triple-, even quadruple-height spaces are open from both sides and have been designed with specific functions in mind. At ground level, the hexagonal courtyards are linked together by four-story triangular openings, creating an urban promenade of close to half a kilometer.

More than just a formal exercise, the expressive appearance of Future Towers is wholly a byproduct of MVRDV’s research into Indian housing. The apartment types themselves are varied in nature to cater to the different demographic groups living in the building. From mobile young professionals to entrenched older residents, Future Towers delivers 1,068 apartments ranging from compact 45m2 studios to 450m2 family apartments with generous double-height spaces – a range of sizes and types allowed by the building’s shifting floor plates and the highly systematic nature of the design.

For architects, the design of housing is often a paradoxical project. Perhaps more than any other typology, housing represents the potential for architecture to give representation to new forms of living and community. At the same time, housing often functions solely as a financial instrument – a means to reliably generate revenue for landowners and developers through rent. In this case, MVRDV has managed to design and build a highly structured, conceptually cohesive, formally adventurous building that pragmatically addresses all the challenges housing in this context has to offer – complex demographics, explosive urban growth, and an incredibly modest budget. 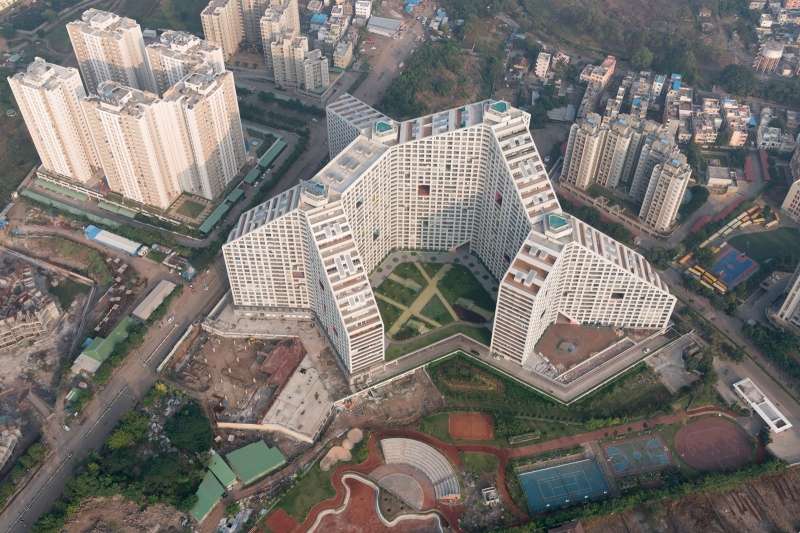 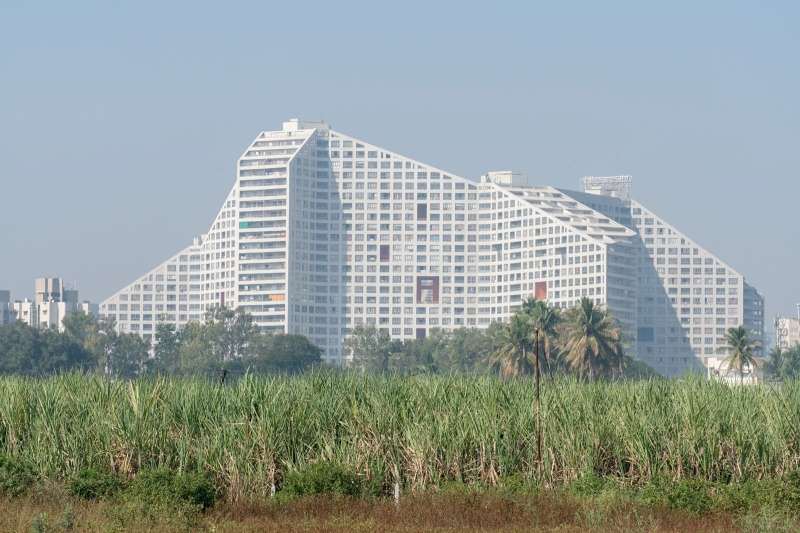 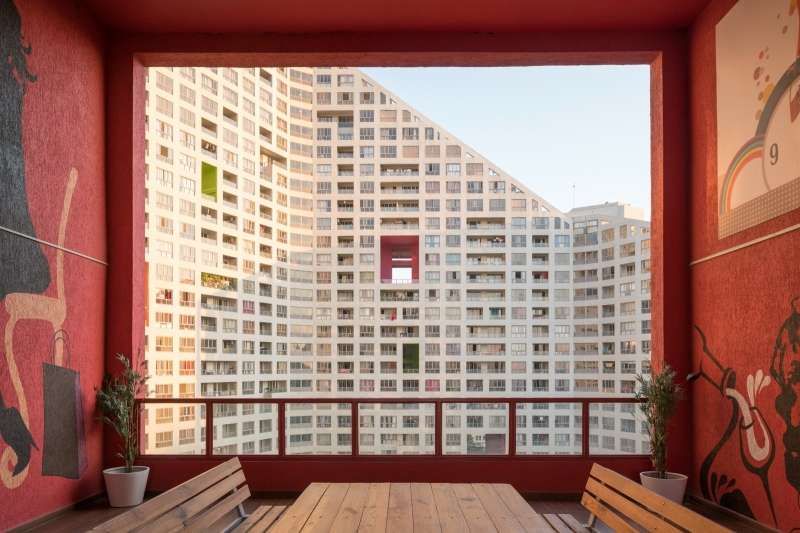 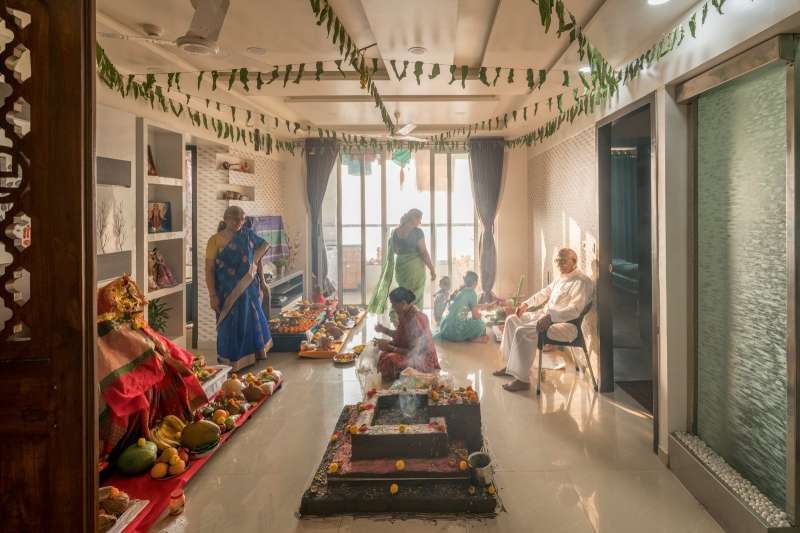