Kongens Nytorv: Inspired by the Baroque 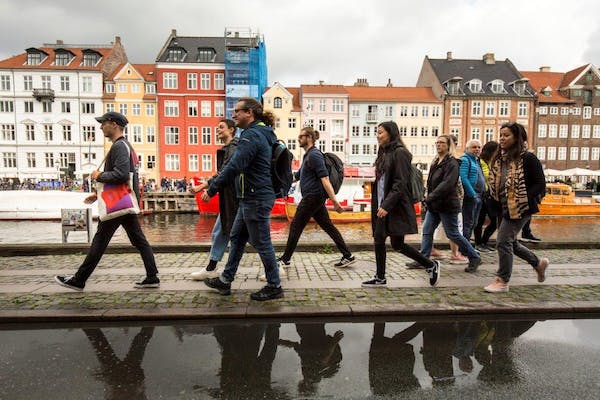 Kongens Nytorv is a square located in the center of a high-traffic roundabout where Nyhavn, Strøget and streets toward Østerbro, Nørrebro and Christianshavn intersect.

The square is modeled according to the ideals of a Baroque city plan, including broad, perpendicular streets and symmetrical squares. Although Kongens Nytorv is not entirely symmetrical, the architects made do by designing a perfect Baroque parterre garden. The garden is called “Krinsen”, which means “the circle”. The square is named in tribute to King Christian V, who ruled Denmark when Kongens Nytorv was built, and an equestrian statue of the king is also found here.

The garden and the statue have seen their ups and downs through the ages. During some periods, the garden grew wild and resembled more of a forest, and in 1998 the trees were stricken by Dutch elm disease and had to be felled. The statue was cast in lead, but the soft metal slowly deteriorated due to the impacts of wind and weather. In 1946, the statue was re-cast in bronze.

Kongens Nytorv underwent a renovation in the 1990s, including cobblestone paving and the replanting of Krinsen garden. In 2001, the double row of trees lining the square was re-established with 80 linden trees. The 300-year-old parterre garden now stands almost as it was originally planted in 1688.

For two separate periods of time, Kongens Nytorv was one of the large Metro construction sites in Copenhagen. With the opening of the Metro City Ring in 2019, Kongens Nytorv reassumes its central role in the life of the city. Through the years, it has often hosted large outdoor photo exhibitions, and in the winter Krinsen is transformed into an ice skating rink.