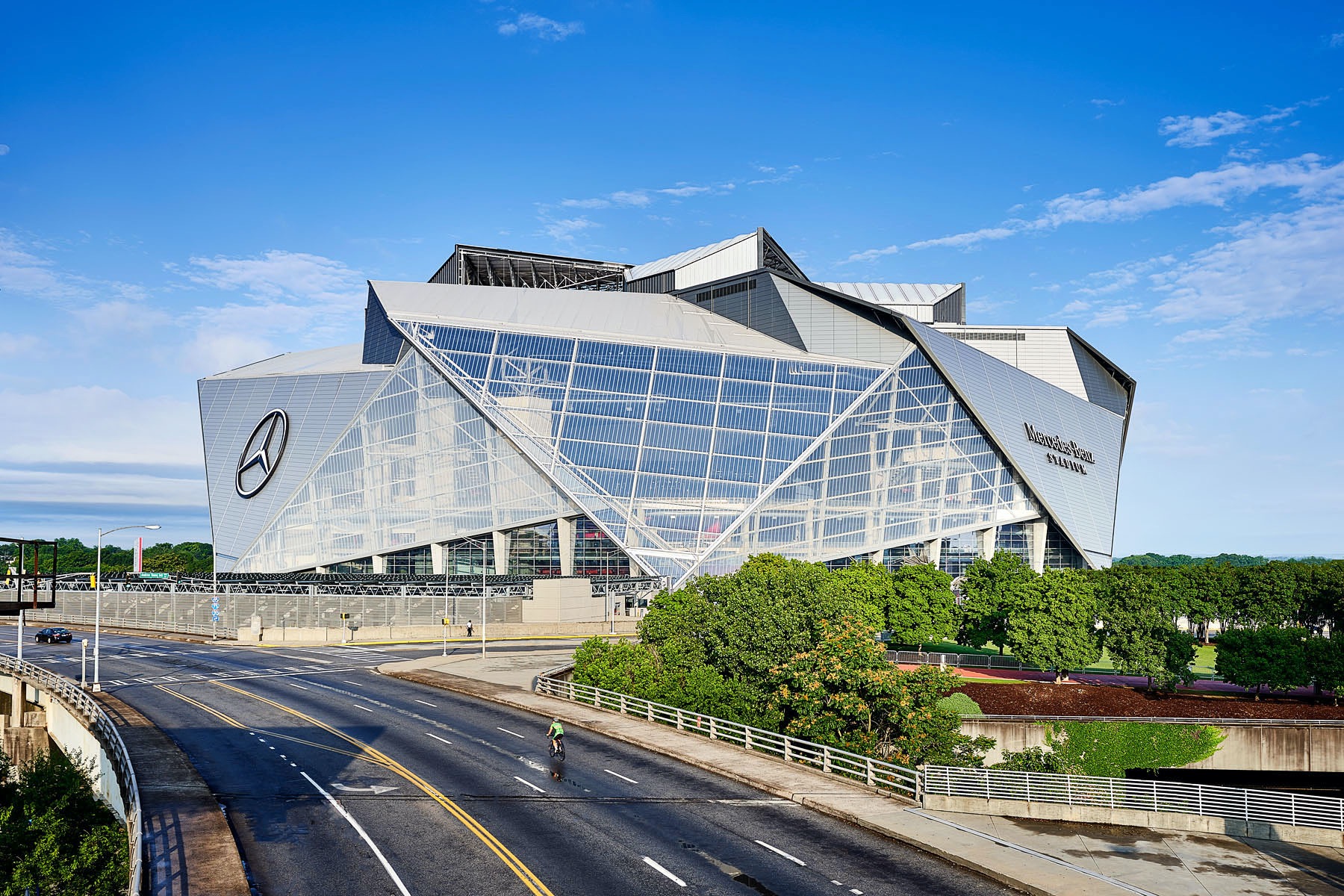 Opened in 2017, Atlanta’s new Mercedes Benz Stadium by HOK Architects has replaced the adjacent Georgia Dome, providing a venue for 71,000 just outside the city center.

The new stadium has an ambitious technological and sustainability agenda, with a total cost of $1.5 billion. The focus of the design is the stadium’s retractable roof — an epic, central oculus controlled by eight triangular ‘petals’ operating like the aperture of a camera. While the retractable roof allows for natural ventilation and lighting, as well as flexibility in the building’s performance across weather and seasons, it’s clear that the real function of the device is as a piece of architectural theatre. As HOK’s design principal Bill Johnson claims, “the vision was that the opening would create a very tiny pinpoint of light on the Falcons’ logo at the 50-yard line, and as the roof retracted, the spotlight would become bigger and bigger”. Since antiquity stadiums have served as sites of ritualistic spectacle. As seen in other projects such as Wanda Metropolitano and Stade de Bordeaux, large central apertures (oculi) are a common theatrical device in stadium architecture, heightening the sporting spectacle to an almost religious experience through the framing of sky and contest.

Each hefty panel weighs 1,600 tons, constructed with robust steel trusses and clad in ETFE — ethylene tetrafluoroethylene, a fluorine-based plastic with high resistance to corrosion. The panels slide past one another and lock into place on individual tracks, taking under 10 minutes to move from one position to another.

In addition to this traditional, analog device of immersive, spectacular experience, an immense amount of technological infrastructure provides, according to HOK, the “technology-driven, interactive game-day experience inside Mercedes-Benz Stadium”. A 360-degree, ‘one-of-a-kind’ epic halo screen is suspended from the central oculus, 6 stories high with a 330-meter circumference. Additionally, there are another 2,000 televisions throughout the venue, a 3D video board, and seamless Wi-Fi connections, with more than 6,500 kilometers of fiber optic cabling supporting these technologies. The immensity of this infrastructure demonstrates a shift in the contemporary stadium from a physical, analog experience (a mass of bodies watching the performance of other bodies on the pitch) to a digital realm. No longer limited to the spectacular experience of gathered crowd and contest, the stadium experience is now intertwined with in-stadium analytics integration, ephemeral social networks, fan-controlled stadium content, open content sharing, enhanced in-game replays and analysis, fan-based data analytics, etc. This technological shift is not only to enhance the viewer’s experience, but also to develop the stadium as a commercial platform: ‘this hyper-connectivity can be the foundation for creating new transactions, growing new businesses, and unlocking new revenue streams’ (Deloitte 2016). As stated by the architects, ‘digital media platforms throughout the stadium offer flexible opportunities for teams and sponsors to display targeted programmable content on game days’.

MBS’s central location is also a reflection of the contemporary stadium as a commercial platform. Since the 20th century, stadiums have traditionally been built on the periphery of the city, where land is cheap; however, there is an increasing trend to move these mega-projects back to the city center, ‘anchoring larger mixed-use real estate developments and creating “arena districts” that reshape commercial activity in the neighborhood’ (Deloitte 2016). MBS is a district-scale project – with ambitions to reshape not only the commercial activity of the neighborhood but also its provision of resources through sustainability measures.

The project’s sustainability objectives extend beyond the building itself to share resources with the surrounding neighborhood. It is the first professional sports stadium to receive a platinum rating in Leadership in Energy and Environmental Design (LEED) from the US Green Building Council. The main sustainability feature of the project is a massive cistern that can recapture more than 2.5 million liters of water. This huge water sink protects the surrounding neighborhood — which sits in the Proctor Creek Watershed, an area prone to flooding events — from flooding. The water is reused in a cooling tower and for irrigation of the surrounding landscape through a partnership with Trees Atlanta. The sustainable design further extends into the community through the creation of urban farming and open recreation spaces, and photovoltaic panels that generate energy for the stadium and surrounding neighborhood. 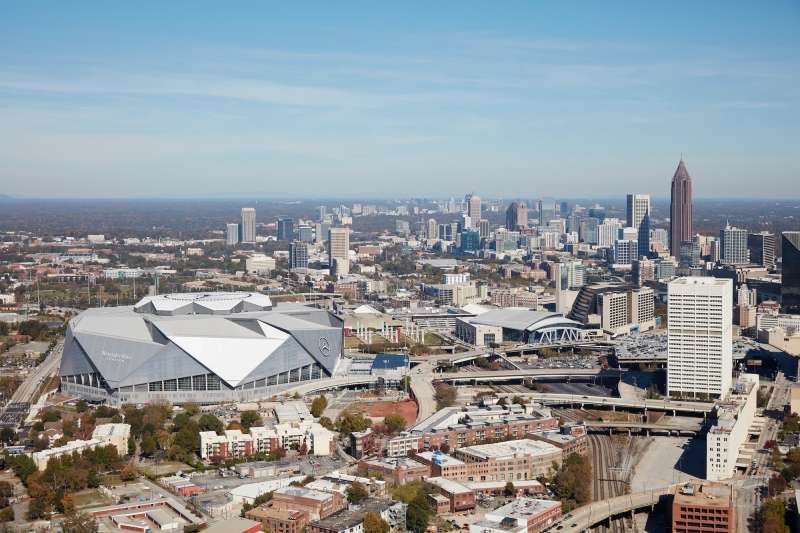 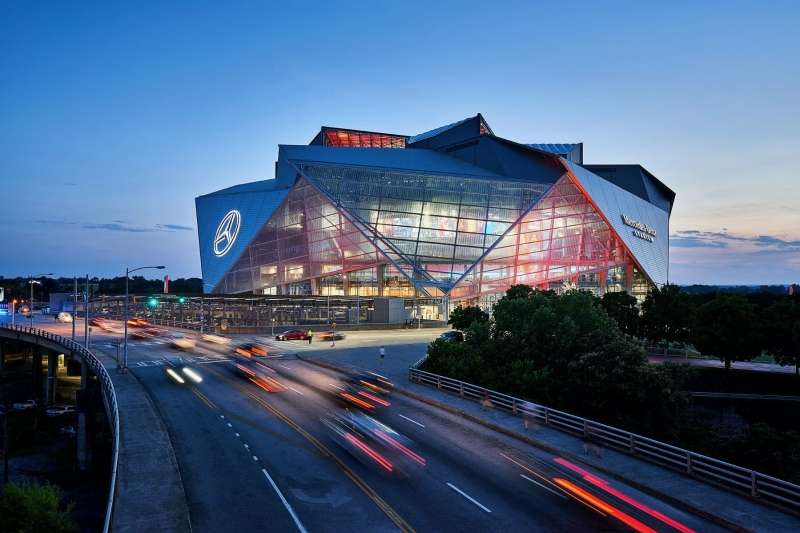 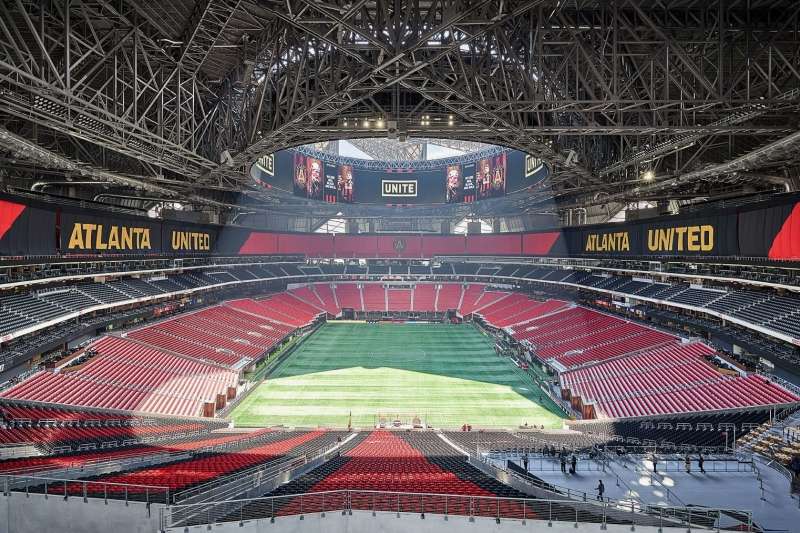 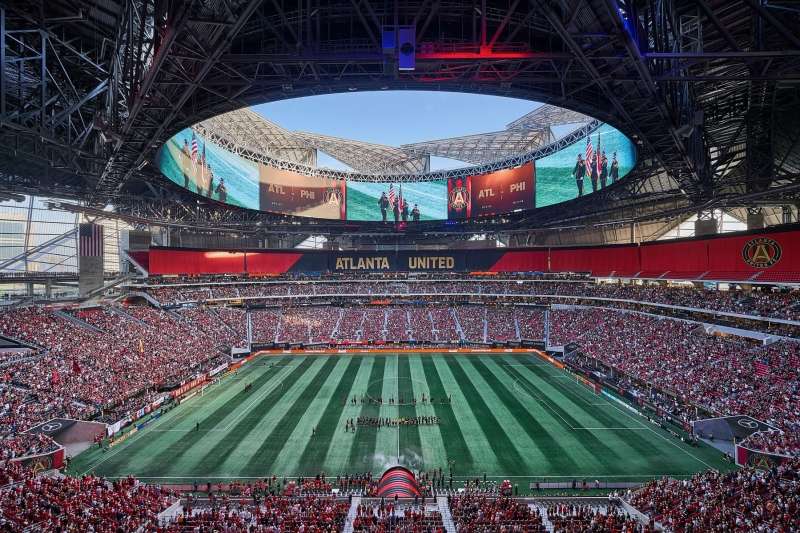 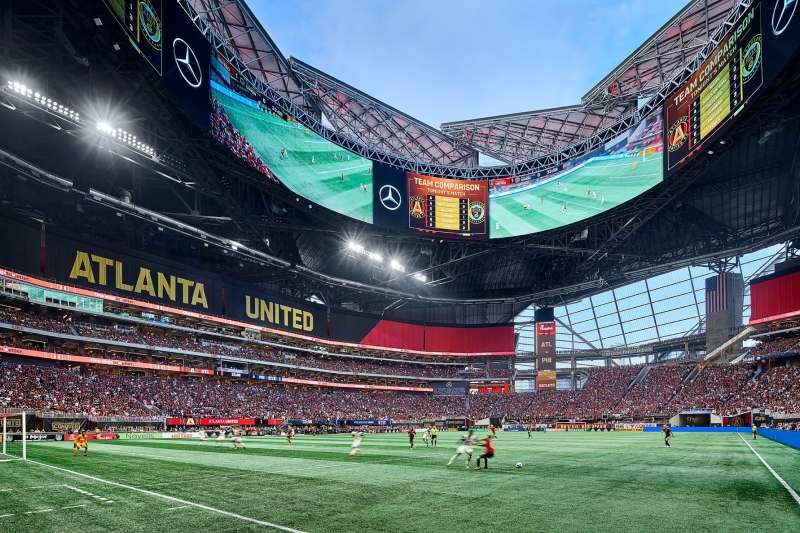