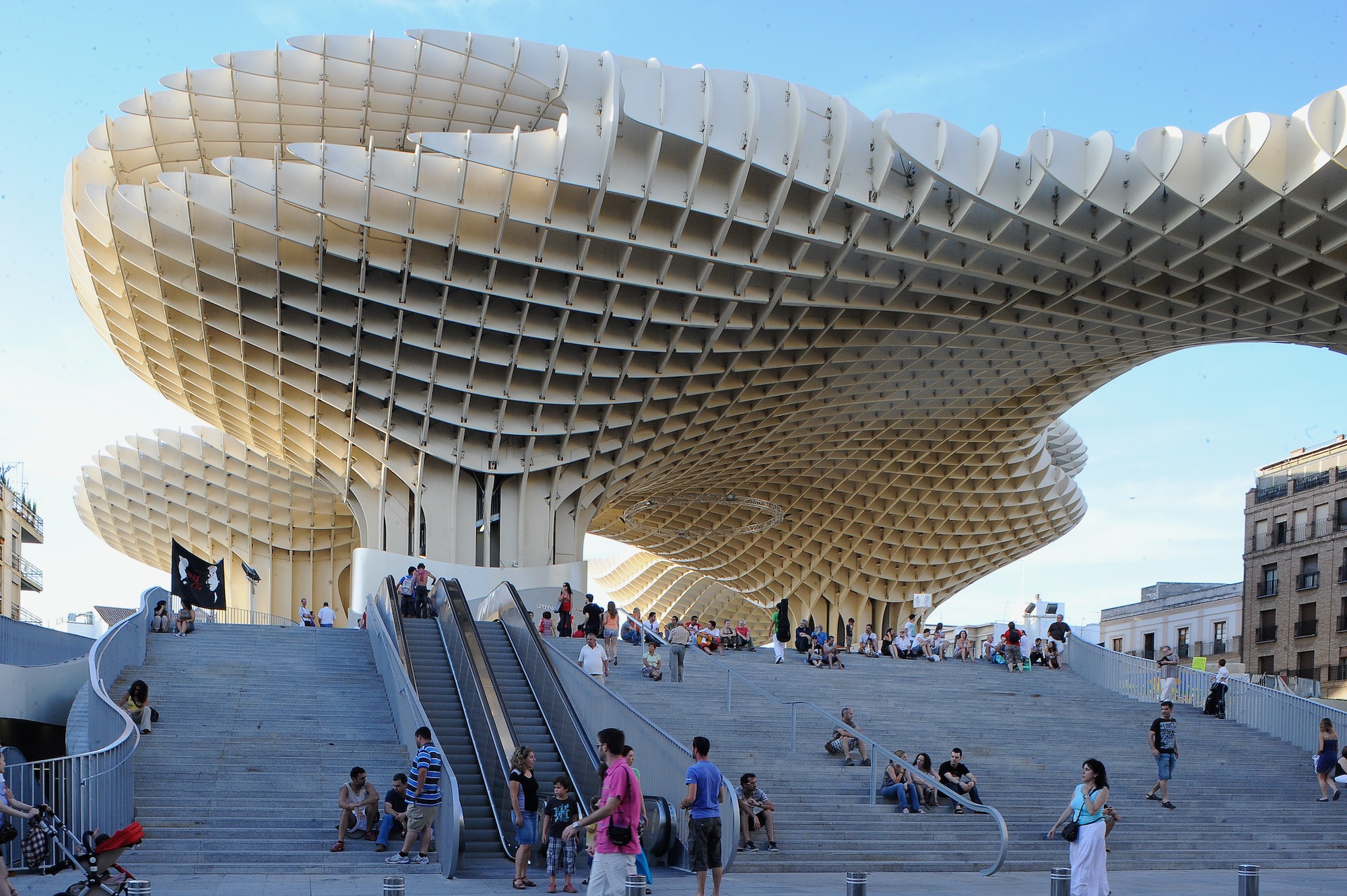 Movement is a keyword when describing J MAYER H.’s Metropol Parasol: its undulating curves suggest movement — they provide an image of movement. Yet the structure also encourages the movement of people visiting the site. This is indeed civic architecture, a structure that promotes action and interaction.

Metropol Parasol is situated in the historical center of Seville on Plaza de la Encarnación, one of the largest squares in this area of the city. On the grounds of a demolished convent, a walled-in market consisting of several buildings functioned here during the 19th century, until 1973 when the ensemble was torn down. The square went on to be used as a parking lot during the 1980s and the possibilities for using the site for underground parking garages were suggested. When archeological remains of Roman mosaics and building structures, as well as early Christian ruins, were uncovered it was however decided to stage an international competition for the future development of the square. This was won in the summer of 2004 by Jürgen Mayer H. and his Berlin-based office J MAYER H.

Metropol Parasol integrates the various historical layers and urban functions of the site. The archaeological excavations and ruins can be visited and contemplated beneath street level. The ground floor retains the commercial activities of the market with facilities for shopping. Curving handrails and broad flights of steps lead to a large platform housing cafés, which may first and foremost be appropriated by the citizens for all sorts of activities and events — concerts, public meetings, and gatherings — or simply for strolling around, meeting friends, and enjoying a bit of shadow amid the hot Spanish summer. The shading canopy rests on six cylindrical columns or ‘trunks’. These, as well as the foundations, are made of reinforced concrete. Lifts provide access to the upper amorphously shaped level where one finds a large restaurant and a 250-meter-long walkway with breathtaking views of the inner city.

The canopy is constructed of vertical laminated wood plates following a 1.5-by-1.5-meter cutting pattern. The assembled plates thus form a grid structure — a grillage. For safety reasons, the restaurant is situated on a composite steel platform. The wood plates have been sprayed with a polyurethane coating and painted in an ivory white shade that visually brings the individual pieces together. It also results in a peculiar effect: the structure appears simultaneously as a built-at-scale construction as well as an oversized model. This ambiguity between form, image, and structure is further emphasized by the fact that the construction has not been covered but is laid bare; this accentuates the contrast between the repetitive pattern of the grid and the winding shape of the canopy.

The structure forms a new gathering point in Seville: a place for interaction, in which ancient is connected with the present, the earth with the sky. The grid structure, extensively used by the Romans for urban layouts, is here transformed and contrasted by the curving shapes of the canopy. Further movement is suggested between points, lines, and surfaces — from the nodes formed by the ‘trunks’ to the meandering outline of the canopy, to the imaginary surfaces created by the grillage — a play between what is revealed and what is not, between virtual and actual.

Metropol Parasol is one of the largest projects completed so far by J. MAYER H. Breaking boundaries through the design of elaborate forms is nothing new to the office, as witnessed by projects such as the Danfoss Universe (2007), DUPLI CASA (2008), and the Mensa Karlsruhe (2006) — the latter project featuring an earlier version of some of the innovative construction principles developed for the Metropol Parasol. Compared to these projects, Metropol Parasol features a new complexity, not least regarding the interweaving of the site’s historical and functional layers and the intersections of programming that the project advances.

Drawing on various references and supporting a multitude of interpretations, Metropol Parasol playfully enters the city tissue as a bold new creature. To some it may appear as a grove of trees, thereby referring to the actual trees on the square and paraphrasing their shading capacities. This interchange between human bodies and ‘objects’ has previously been investigated by Jürgen Mayer in projects such as Wheater. House (1994) and heat.seat (2001). Others would imagine this group of six grounded volumes as mushrooms or as a giant cloud; references to nature inevitably spring into mind. We could also locate parallels to the Gothic architecture of Seville, in particular the Catedral de Santa Maria de la Sede and its tall, tree-like columns.

Rather than attempting to adapt to the bland surroundings of the Plaza de la Encarnación and its homogeneous facades, Metropol Parasol contrasts and thereby enlivens the square and city center of Seville: a bold stroke by J. MAYER H. but successful in proving that sometimes disparity is the best solution when engaging with historical surroundings. 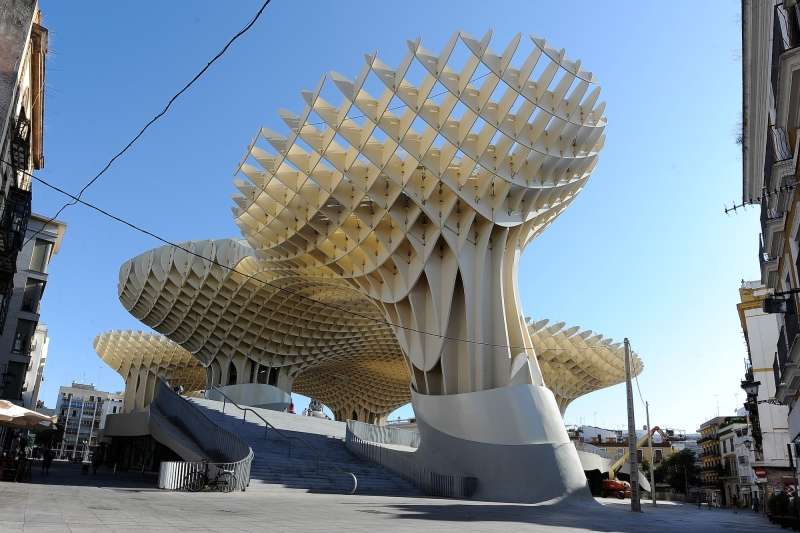 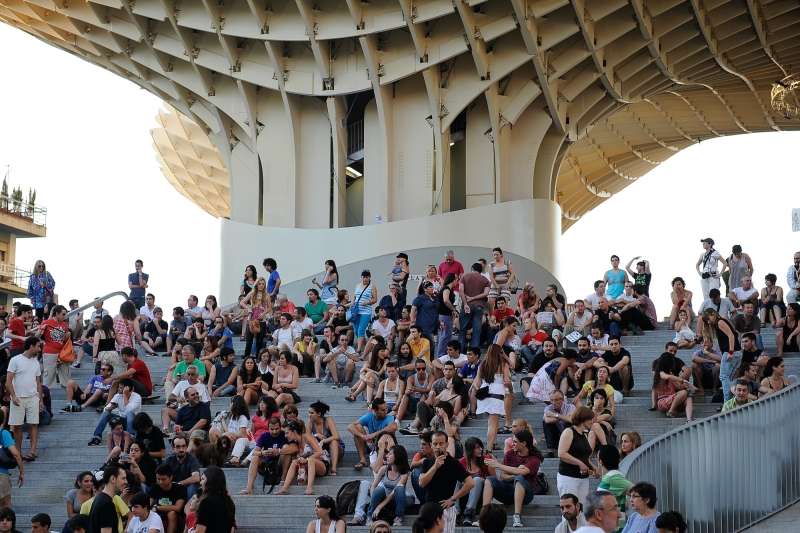 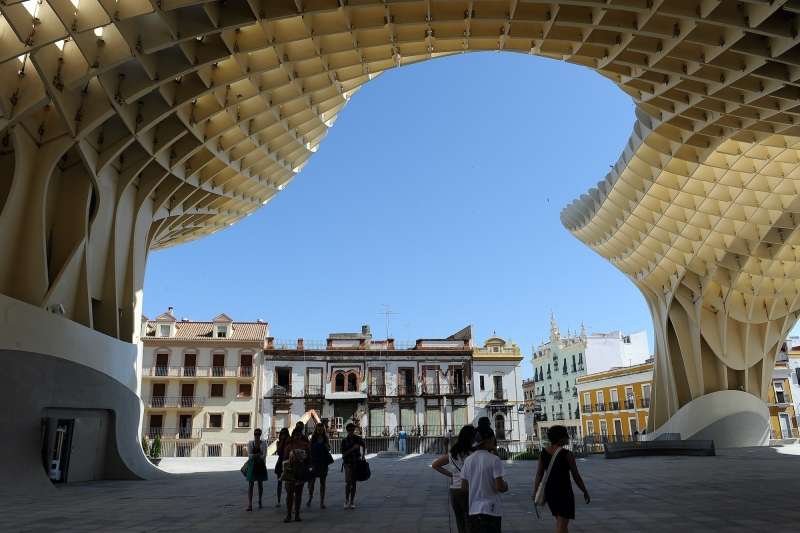 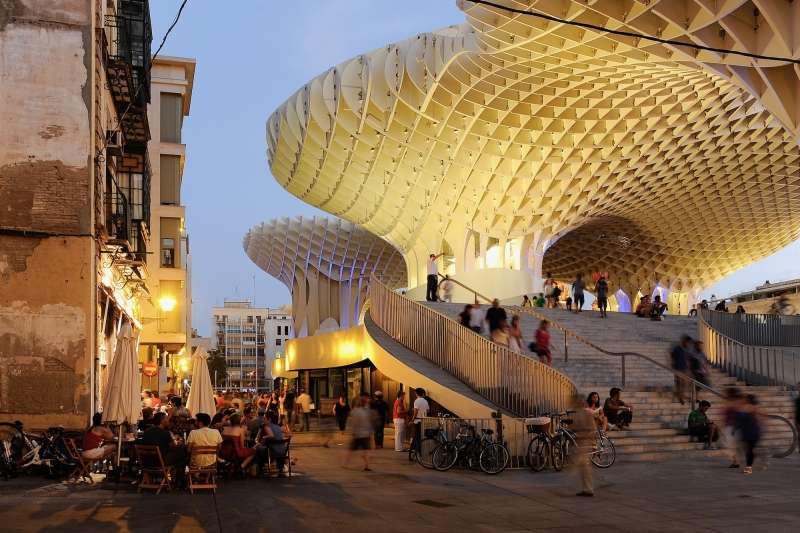 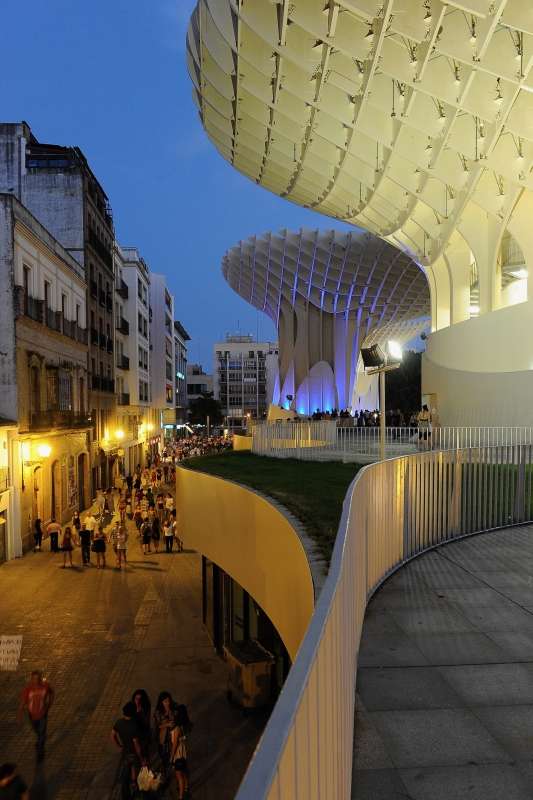 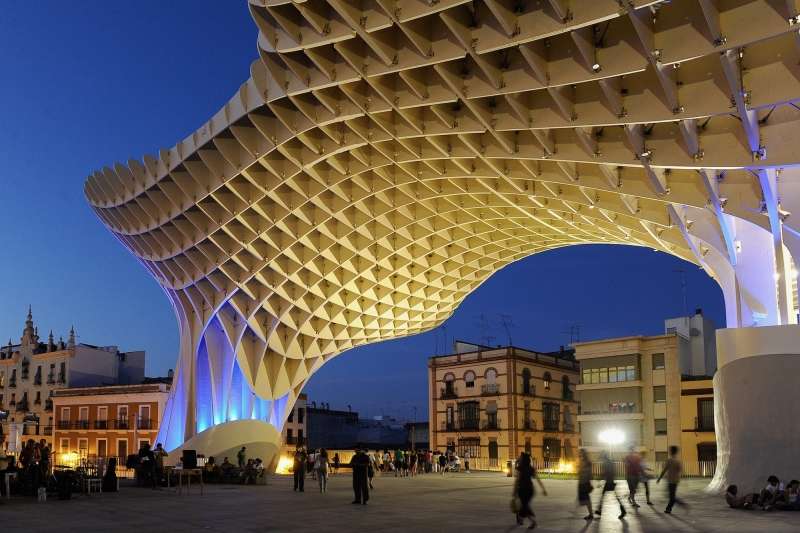 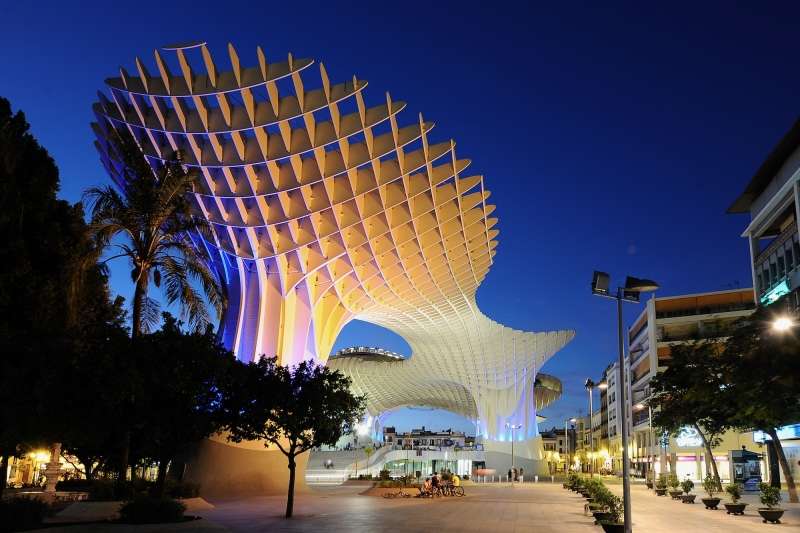