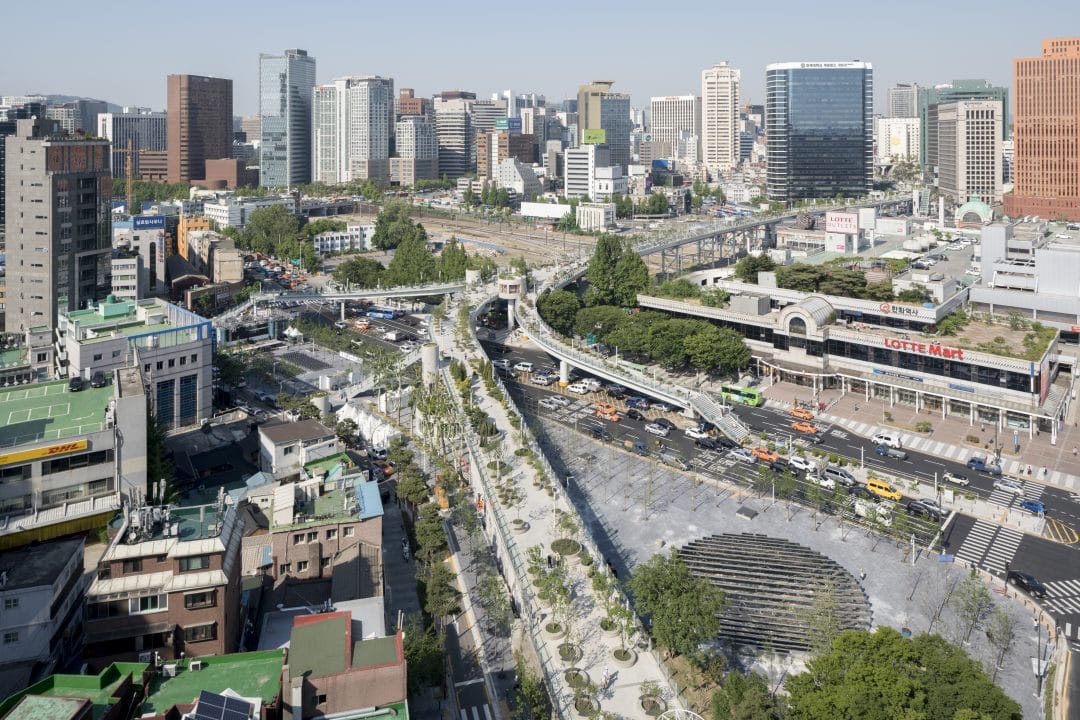 Dutch firm MVRDV has transformed an elevated highway in central Seoul into a public garden, challenging the city’s existing hierarchies between car and pedestrian.

Whilst simple in concept, Seoullo 7017 is characteristic of the city’s ongoing investment into open public space that prioritizes livability, walkability, and communality over economic gain.

MVRDV won the competition bid in 2015, and in just two years has worked to transform the inner city highway into a botanical bridge, redirecting traffic and redefining it as a public space. More garden than a park, the bridge’s primary function is providing a much-needed pedestrian route, with a vast array of potted Korean plant species introduced to slow the movement of people along its kilometer length.

Located in the heart of Seoul, a true plant village has been realized on a former inner-city highway in an ever-changing urban area.
— MVRDV

Seoullo 7017 connects Namdaemun Market with the city’s Malli-dong, Jungnim-dong and Cheongpa-dong neighborhoods, sweeping over the top of Seoul’s main railway station as well as several multi-lane highways. By connecting these formerly fragmented areas, the project aims to have a regeneration impact beyond its elevated platform. Whilst the central part of the bridge is exposed above a sprawling expanse of railway tracks and lines of traffic, towards each end it becomes absorbed within high-rise towers, with new walkways, bridges, elevators, and escalators connecting the route directly with neighboring hotels, shops, and gardens. These connections maintain the bridge as a relatively uninterrupted and un-commercialized space, whilst supporting it with a sublayer of activity and attraction.

From the start, MVRDV engaged with this need to change the forgotten and existing infrastructure into a green symbol that will become a catalyst for a greener quarter for Seoul.
— MVRDV

The bridge hosts 50 families of plants, including trees, shrubs, and flowers, growing in 645 cylindrical concrete pots. Some 24,000 plants create a veneer of controlled nature over the strictly urban condition below, subdivided into several smaller gardens that have individual identities and change with the seasons. Simple in concept, the project’s primary challenge was concerned with how to overlay and maintain this mass of Korean planting on an elevated steel and concrete structure. The result has drawn criticism for being dominated by a concrete grey rather an overtly ‘natural’ appearance, but perhaps the project and its young plants need some time to mature.

Furthermore, MVRDV argues that the bridge represents a typically Korean ‘sci-fi’ approach to urban vegetation – an aesthetic reinforced by the surreal blue glow radiating from the loops of lighting at the bases of the concrete planters – and is honest of the fact that the project is a superimposition of a natural landscape over an overwhelmingly urban condition. But the desire for a little more nature is understood when crossing the bridge in the height of summer when larger trees would provide some shelter from the oppressive heat. This is indeed the project’s ambition, and a vast team of local NGOs, landscapers, city advisors, and municipality officials has been amassed to ensure the maintenance and upkeep of Seoullo, understanding that its success is dependent on its continued growth.

Seoullo, translating to ‘Seoul Street’ in Korean, is not the city’s first project to attempt this, with the Cheonggyecheon Stream acting as an exceptional precedent for the successful transformation of vehicular infrastructure into public space — a sunken park running for many kilometers through the city.

Both projects are instrumental in Seoul’s continued efforts to shift from car to foot, with Seoullo’s ‘7017’ derived from the fusion of 1970, the year the overpass was constructed, and 2017, the year it was transformed into a public walkway. Moreover, the project is symbolic of a renewed interest in adapting and revitalizing existing infrastructure rather than reconstructing — a strategy that has provided exciting opportunities for many young architects in Seoul.

Seoul’s ongoing investment in public space priorities walkability, greenery, and communality, with the current mayor (and former activist) Park Won-soon championing the democratization of public space through the design of a ‘sharing city’ – a theme which is central to the city’s inaugural Biennale of Architecture and Urbanism. Seoul’s rapid urbanization has long been defined by huge development conglomerates taking precedence over government, and this is reflected in the city’s lack of civic space or pedestrian movement. The mayor’s efforts to redefine this condition have resulted in projects such as Seoullo 7017, which is significant in its aspiration to be a genuinely open, public space, boldly proclaiming the city’s new agenda. 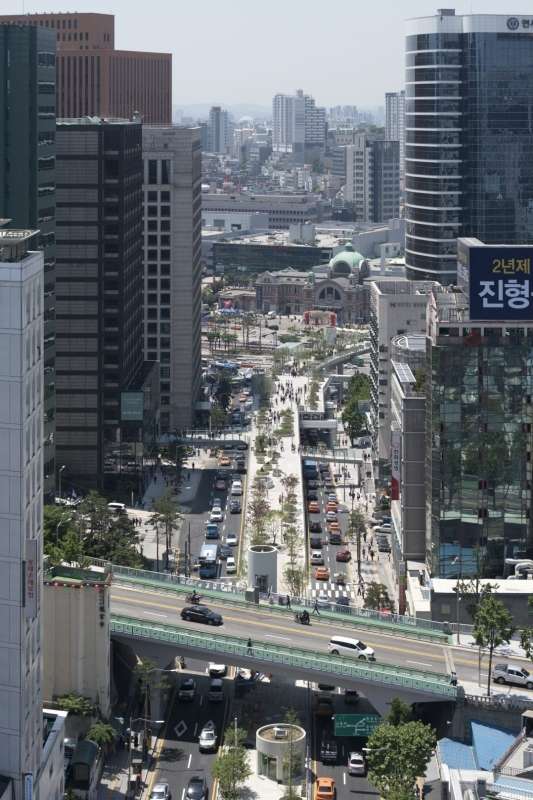 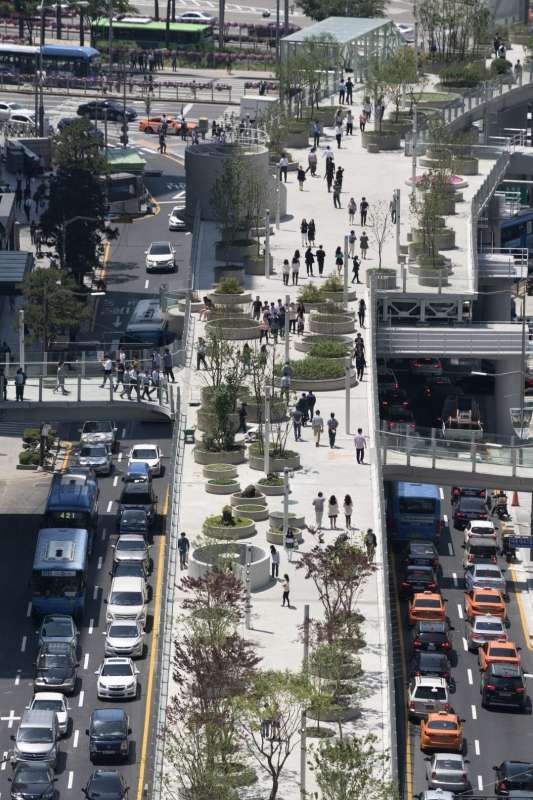 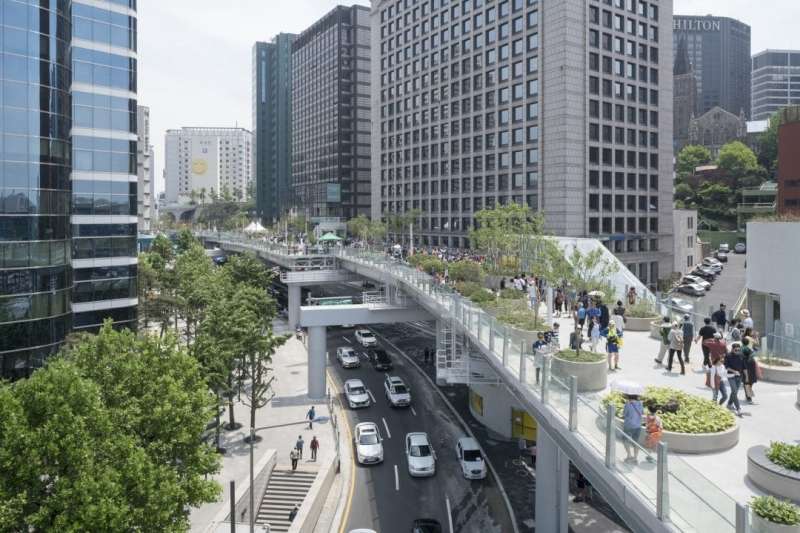 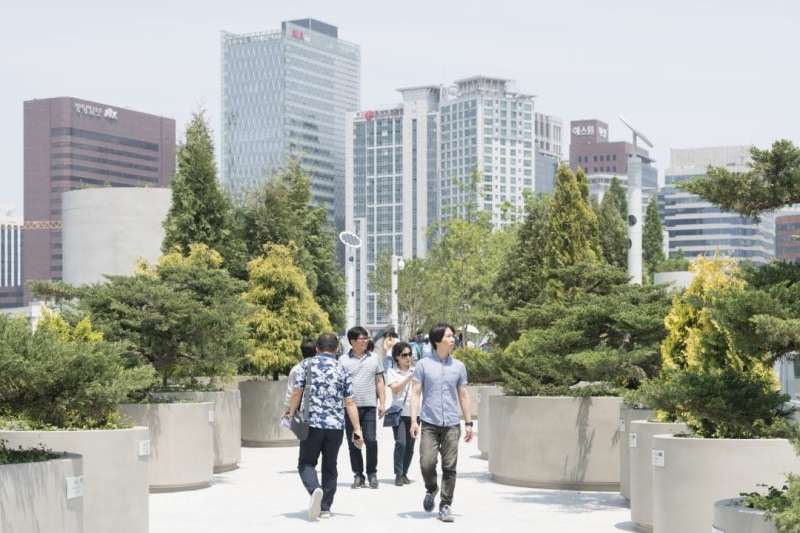 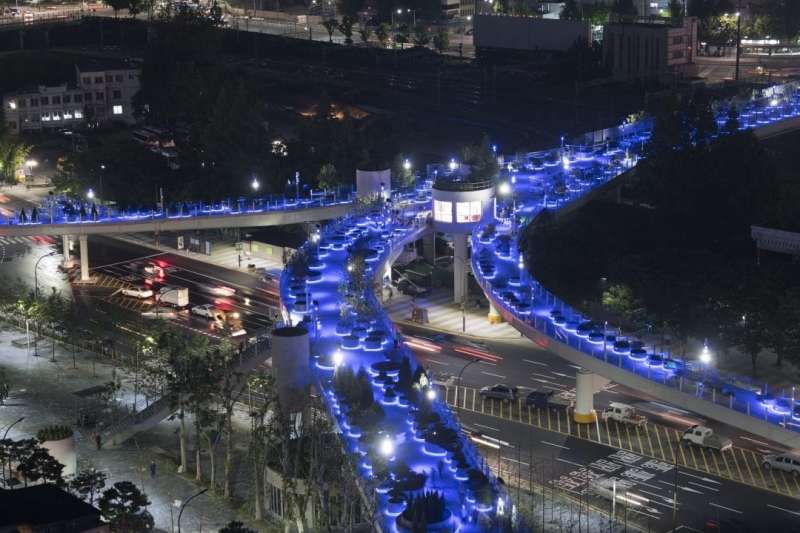