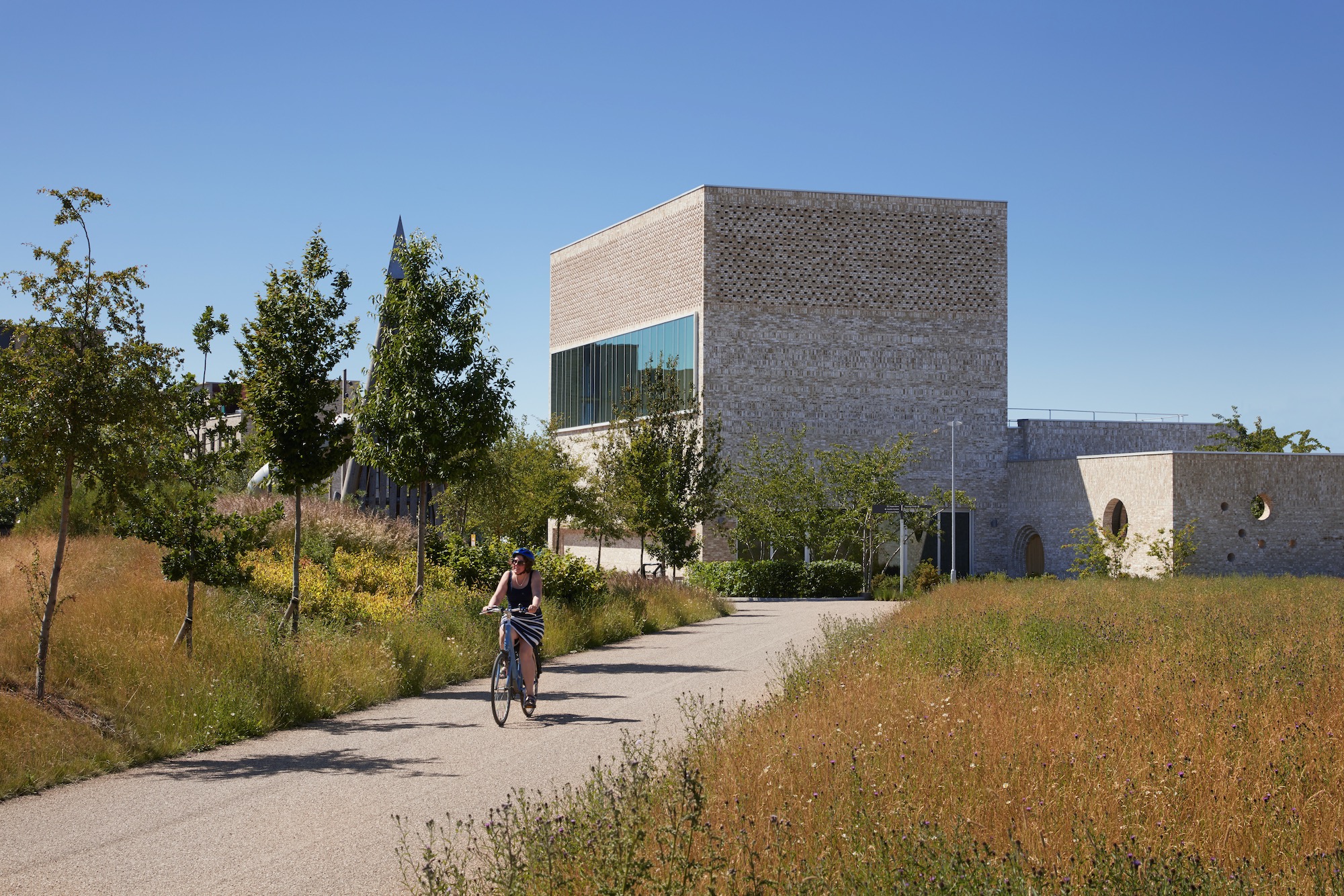 Storey’s Field was commissioned by the University of Cambridge to serve Eddington, a new master-planned district in the North West Cambridge Development that includes a primary school, post-graduate student accommodation, university and college worker homes, and a market.

With the presently placed community already benefiting from the existing nearby sporting facilities, a brief was developed for a new community center and nursery to facilitate a focus on the performing arts. After being nominated for the Stirling Prize in 2015 for the Whitworth Gallery in Manchester, English firm MUMA have demonstrated an architectural finesse yet again with their work for the new Storey’s Field Centre and Eddington Nursery, where they have won the RIBA East, Building of the Year, National and East Sustainability Awards in 2018.

Commanded by a triple-story volume along the southwest edge, the new Centre and Nursery set itself apart as the new iconic and civic gesture for the local community. Located adjacent to the University of Cambridge Primary School, the new Eddington Nursery is arranged around three sides of a landscaped courtyard. Flanking an entrance to the west and forming the remaining side to the courtyard, the civic-scale community center addresses the rest of the district and landscape. Its large articulated brickwork faces and high-level clerestory windows present vistas on entrances from Storey’s Field and Eddington Place, becoming a new signifier in the landscape. A local context is tied back into the building in the presence of a familiar sandy palette and its beautifully articulated faces of brick. The building can be viewed in-the-round where each façade is carefully composed and expressed with patterned brickwork, inset sheltered entrances and carved stone seating. Functionally, the detailed and controlled operations of the courtyard and cloister typologies are a subtle nod to the ecclesiastical history of many of Cambridge’s buildings.

Forming the civic head of the entire facility, the Community Hall was designed with intentions to become its municipal center or town hall. The 180-person main hall has the ability to offer opportunities to a myriad of events, giving it significance above and beyond a space for hobbies, exercise, local groups, and children’s birthday parties. MUMA offset the hall from the perfect square of the courtyard so that it might address a longer view in the master plan of the area. This has created a gathering space outside for the Hall and a parents’ drop-off space for the Nursery. Tackling the informality of this residual space and encouraging a sense of civic pride to this siting, the external walls of the Hall are lined with comfortable seats, encouraging one to stop and chat with neighbors while waiting to enter, pick their children up or congregate for an event.

Inside, the Hall exhibits a palette of architectural merits. It is a beautiful balance of sustainability (ventilated naturally using an underground labyrinth), acoustic performance, function and expression of materials. The acoustic attenuation of the space is aided by the height of the hall and the patterned brickwork of the enclosing wall, which acts to break up the refractions of music and speech. This brickwork also hints at geological patterns present in the surrounding landscape of Storey’s Field. Without the need for complex management systems within the hall, the amount of daylight and the feel of the acoustics can be changed by simply dropping or raising the blinds of the clerestory filled upper portion of the hall. Square-profiled beams of pale wood complement the sand-colored brickwork, supporting the triple-height ceiling space and concealing the ventilation. Each fragment of its function takes part in its aesthetic performance; even the roof access stair is given life as a sculptural spiral that doubles as a prop in theatrical performances.

Adjoining the Hall, the Community Centre serves as a gathering place for a multitude of events; its brief – developed through community consultation – called for three main spaces of varying scale to accompany the pluralistic role of the new center. The small multi-purpose room breaks the courtyard’s pure form and shares vistas out to a small section of the inner garden and entrance foyer. Having its own open-air, walled garden, the bigger multi-purpose room is visually expanded with this external addition. It ensures – like the rest of the building – that a connection out to nature is preserved in every space. The Main Hall and its garden, forming the eastern corner of the site, mirror the connection of the larger multipurpose room and its walled garden. A large circular hole and several other small ones communicate vistas between the two gardens whilst playfully throwing around patterns of light within.

Forming the other three wings of the courtyard, the Nursery connects operationally to the Community Centre, so that the sense of space, ventilation, and daylight from the views of the playground imbue the café and entrance foyer without compromising the privacy of the children. Where spaces have dual uses, such as the external garden outside the wedding venue that is also being used as a reading room by the nursery, the competing needs of the users are balanced and managed by the staff of the building; everyone is happy to put in the extra effort to make it all work.

Inside the many spaces of the Nursery, large windows punctuate the playful brick exterior in classic geometrical forms: circles, triangles, and squares. Within, the sills of these windows double as seats with each opening painted in a different primary color. Clever slatted timber discs provide concealed ventilation routes within these spaces, adding to the thoughtful elevations of each room. Penetrating these nursery spaces, small portholes are inset at different heights (corresponding to the scale of the occupants), allowing children and teachers to peak outside to the garden and at each other. The carved stone seats in the center of the playground continue the motif, as do the round perforations in the angled ceilings of the nurseries.

In the middle, the courtyard allows an ever-present connection between the nursery and community center and to nature, whilst still granting these venues autonomy if need be. For the children in the nursery, the courtyard is a sheltered play garden, solving the need for security without fences. A cloister wrapping around the play garden provides external circulation to the classrooms and becomes a secondary space for covered play. With no corridors, the classrooms can engage directly with the garden and also have views towards the adjacent school playground. The Community Centre and individual function rooms are allowed controlled moments into this garden, benefitting from the sense of nature and cross ventilation the layout provides.

These designed moments show consideration for an enhanced experience of the materials at work and the changing sense of human dimension applied to different sections of the building. The community has been gifted a beautiful Community Centre and the spaces within the nursery could be worthy of a much more sophisticated audience; however, they are all designed to mollify a scale and the activity needed in each space. For example, where small windows are needed, some are imaginatively arranged in the pattern of constellations of stars, evidencing the skillfulness, resourcefulness, and attention to detail of an architectural firm that has succeeded in creating a lasting and truly well-crafted building — one where material or technology is only used where it is needed, and instead, a focus on clever, simple and even playful design becomes paramount to facilitating its desired setting. 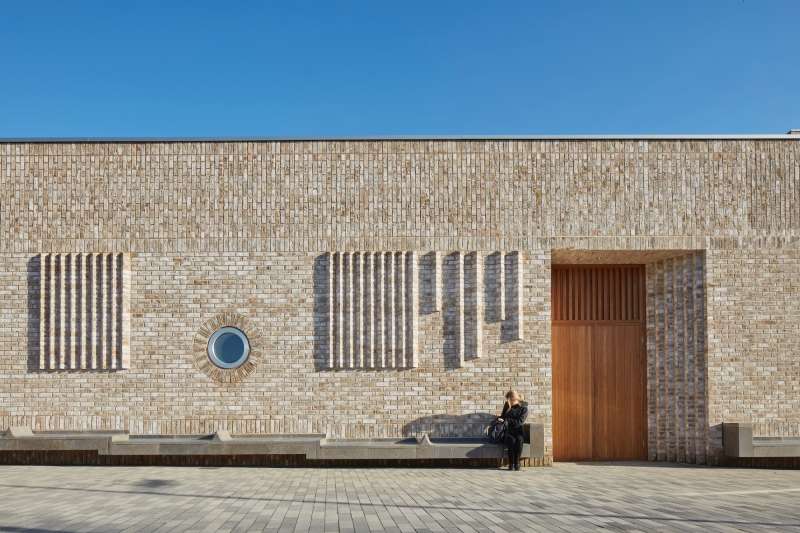 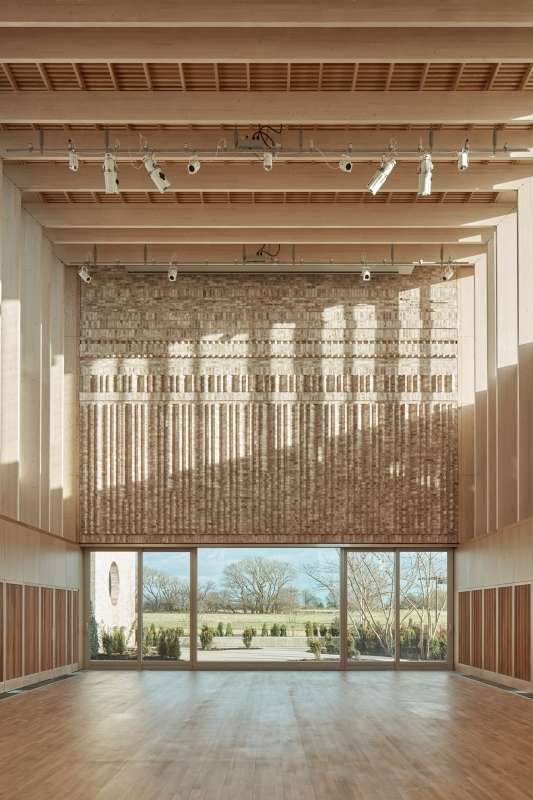 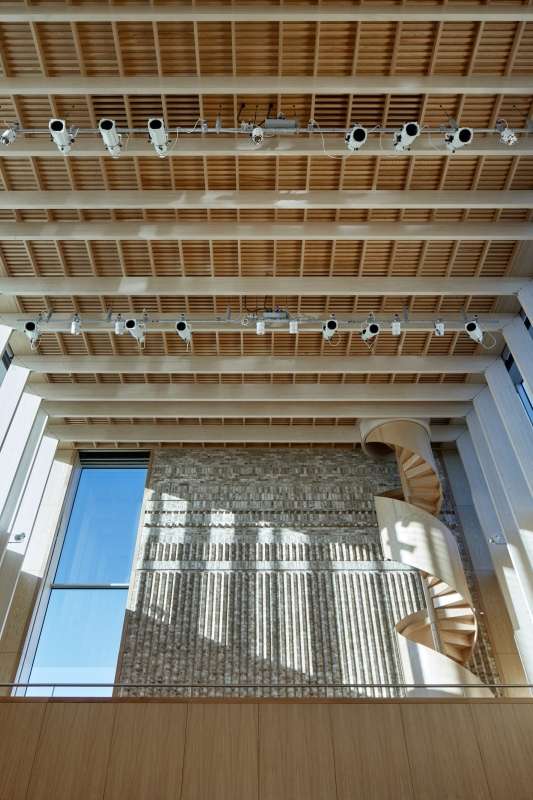 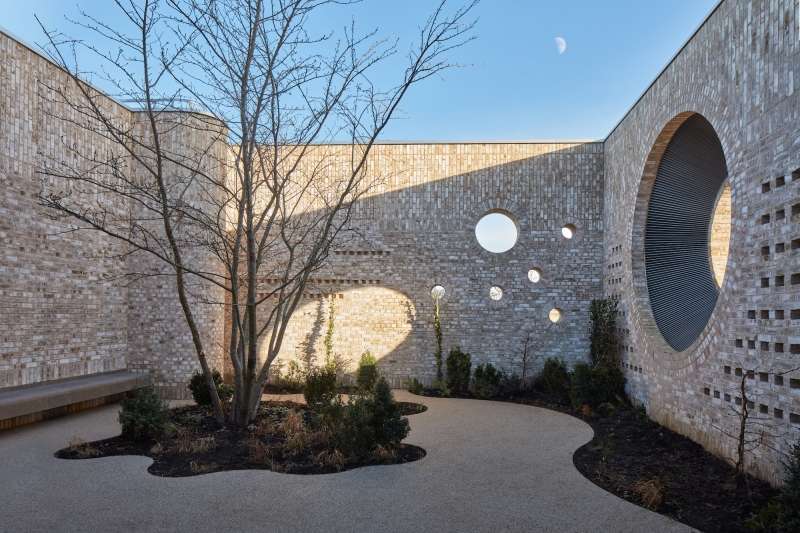 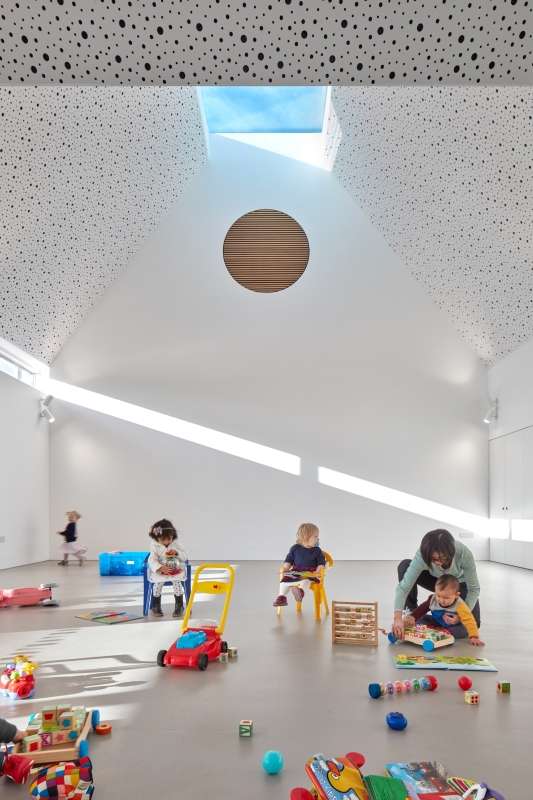 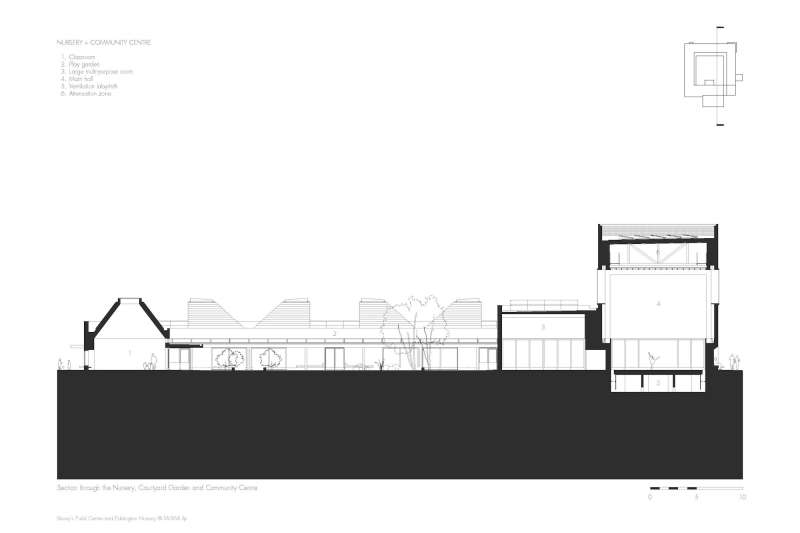 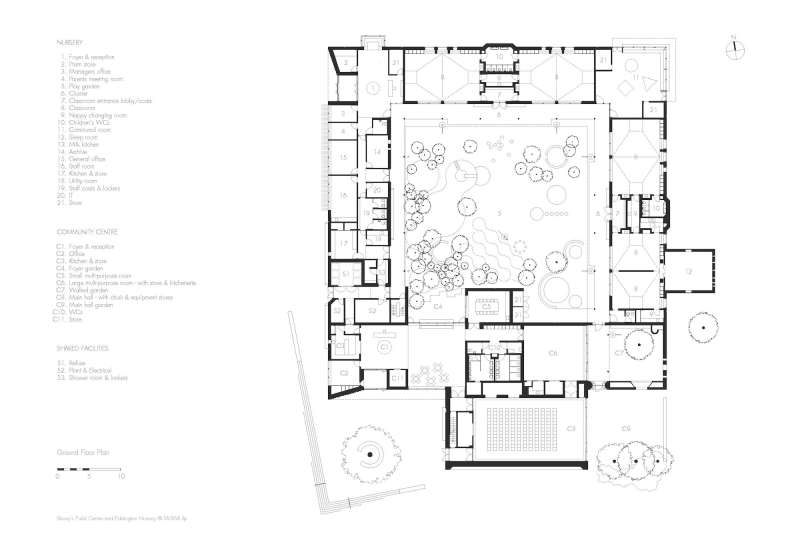