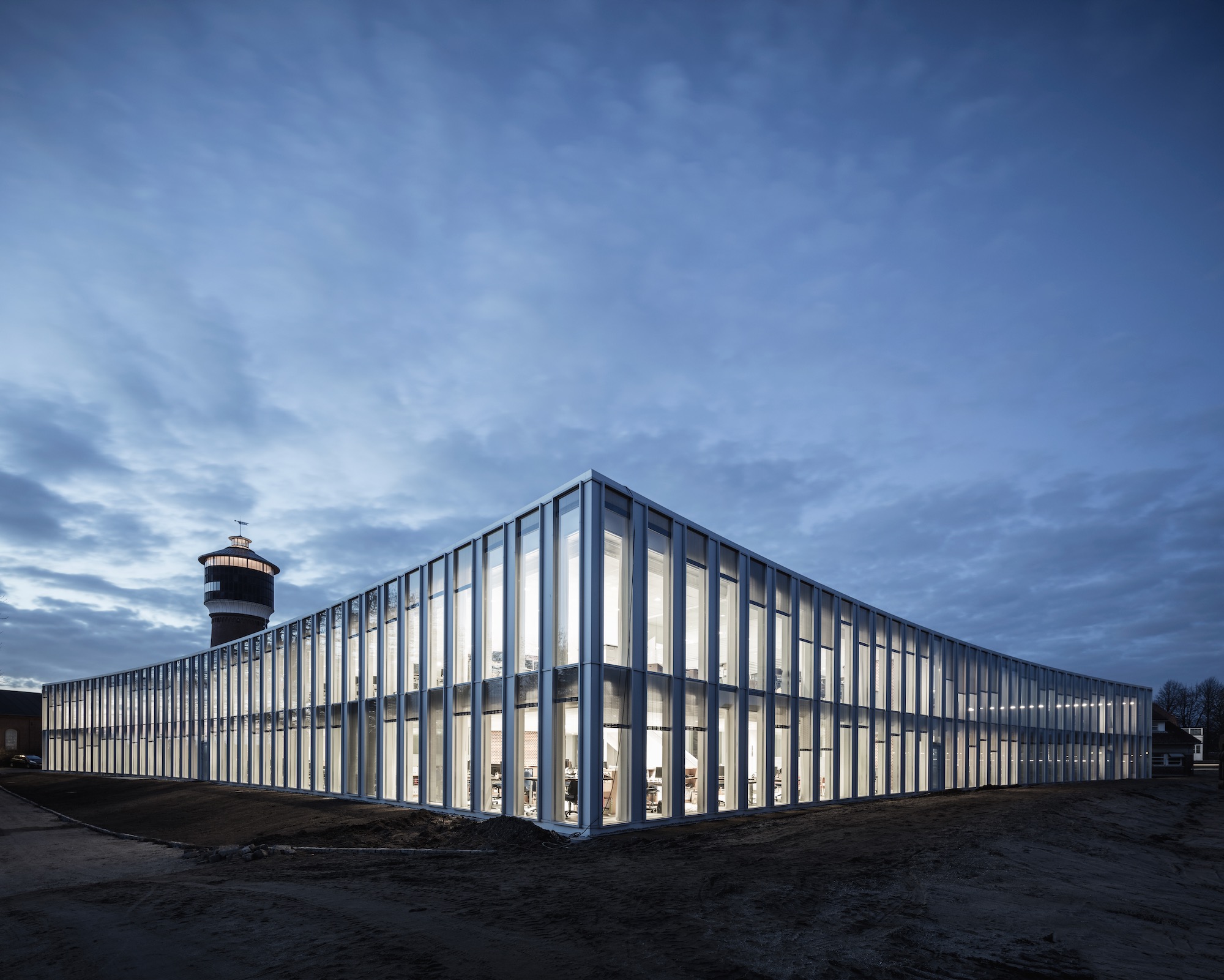 Tønder Townhall is the winning entry in a 2013 competition held by the Tønder Municipality to supplement the existing town hall dating back to 1981, designed by Danish architect Halldor Gunnløgsson.

Gunnløgsson’s architecture is of a postmodernist style and, like much of Tønder’s architecture, built out of bricks. SLETH Architects’ floor-to-ceiling glass extension adds a refreshing lightness to converse with its heavier counterpart, drawing the city out into the surrounding landscape, just as it draws the building’s immediate environment indoors.

This breaking of boundaries by binding indoor and outdoor, culture and nature, history and present-day, is a reflection of Tønder Townhall’s architectural values, as described by SLETH Architects: an “open structure — a democratic and non-hierarchical plan.” For a common space that aims to bring people together, the concept of blurring boundaries is an important one. It could even be seen as an architectural metaphor for the transparency between the people of Tønder and their local government, building a figure of communication and trust. It is, as SLETH Architects call it, “a distinctly open and transparent public house.”

SLETH Architects was founded by architect and landscape architect Søren Leth, with a focus not just on architecture and urbanism, but also in landscape design. SLETH Architects describe themselves as a firm with a “multidisciplinary identity” that is “willing to accept territorial complexity, drawing on historical references.” Their philosophy is evident in the design of Tønder Townhall, not least in the use of brick flooring on the first level of the building, drawing a material connection between the more modern design and Tønder’s historical architecture. The use of brick is repeated in the courtyard between the town hall’s new and old parts, as well as around the building’s interior circulation cores. This reflection of material adds a relationship between interior and exterior of tactility as well as a visual one.

In addition to Tønder Townhall’s material relationship to its urban context, the building’s form alludes to the surrounding landscape. Just like the nearby river, Tønder Townhall’s facade has a subtle curve that is most striking at eye-level, visually drawing one in and around the building. In plan, Tønder Townhall resembles a funnel or arrow, pointing the city out towards the marshlands.

Inside, the addition has an open plan with desks and meeting spaces partially separated by shelves, in contrast to the original town hall’s corridors-and-offices division. Just as the interior and exterior spaces are bound by visual transparency and meeting spaces by the fluidity of movement, the two levels in the town hall are bound together by light and acoustics through the open double-height walkway along the courtyard perimeter.

SLETH Architects’ Tønder Townhall is a place of connection between people, time, and spaces. It is an architectural manifestation of respect for both history and context, but also of a dream for certain democratic values to be achieved among people in the years to come. Tønder Townhall can be seen as a homage to past, present, and future, folding into its place on the edge of the city. 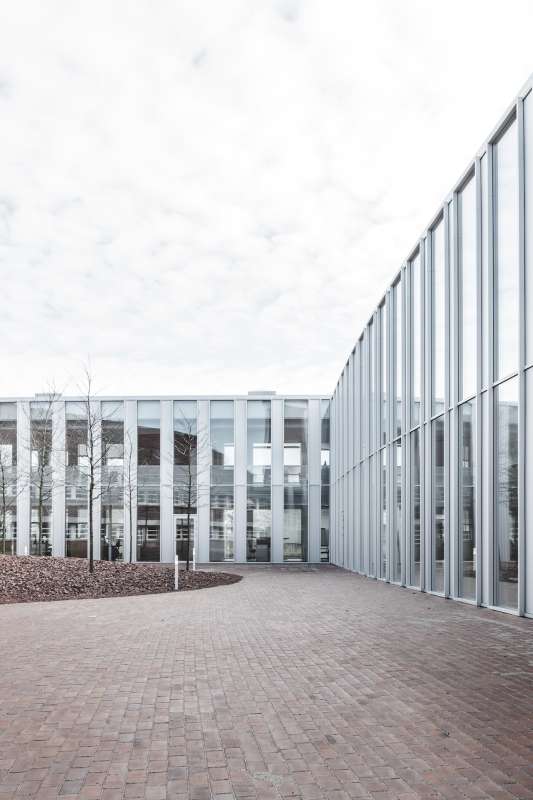 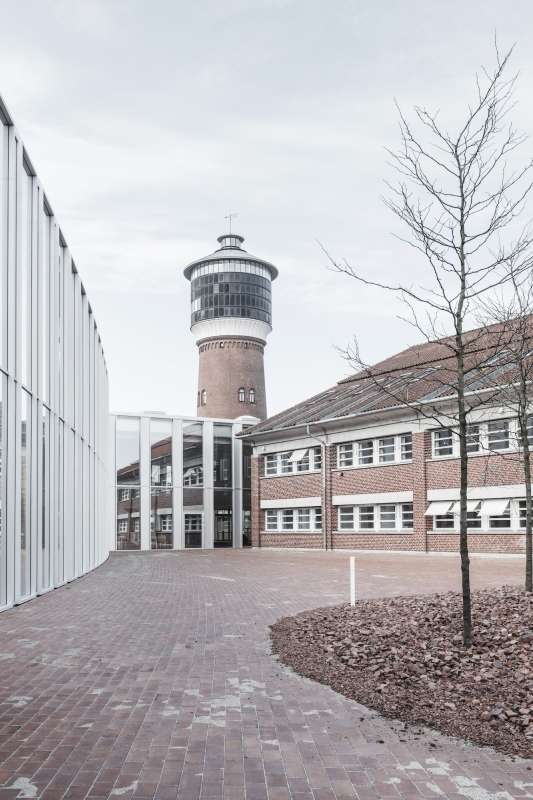 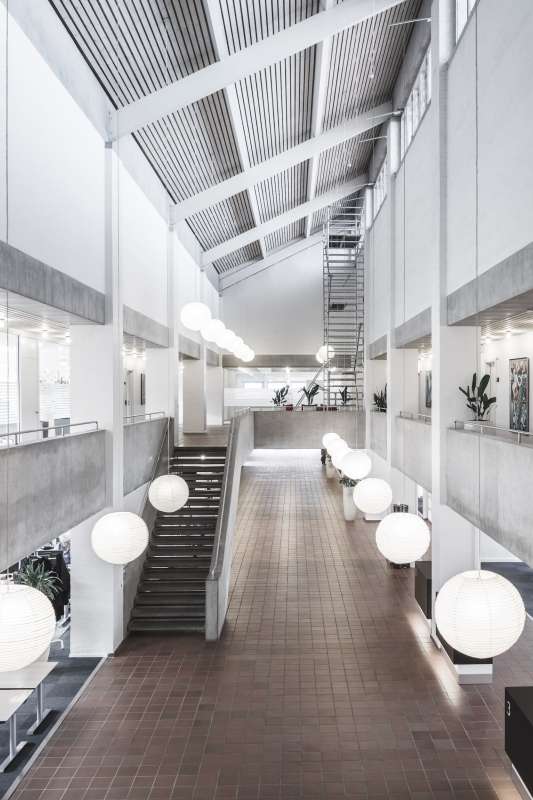 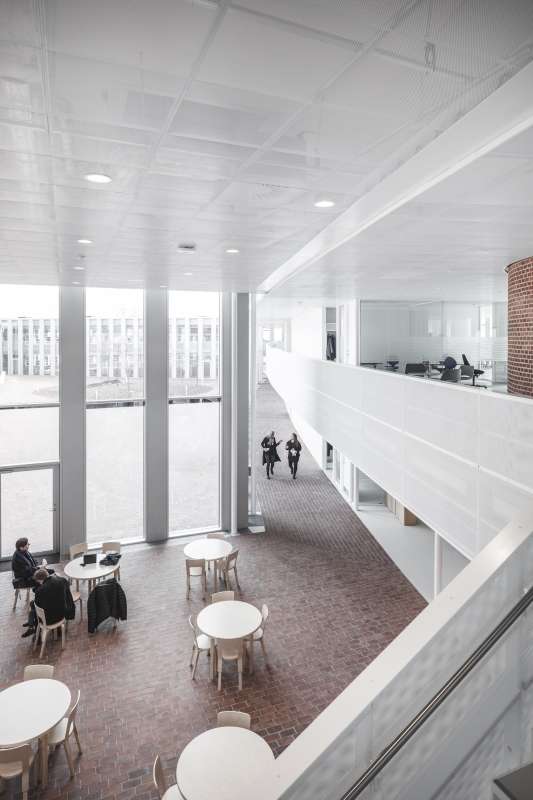 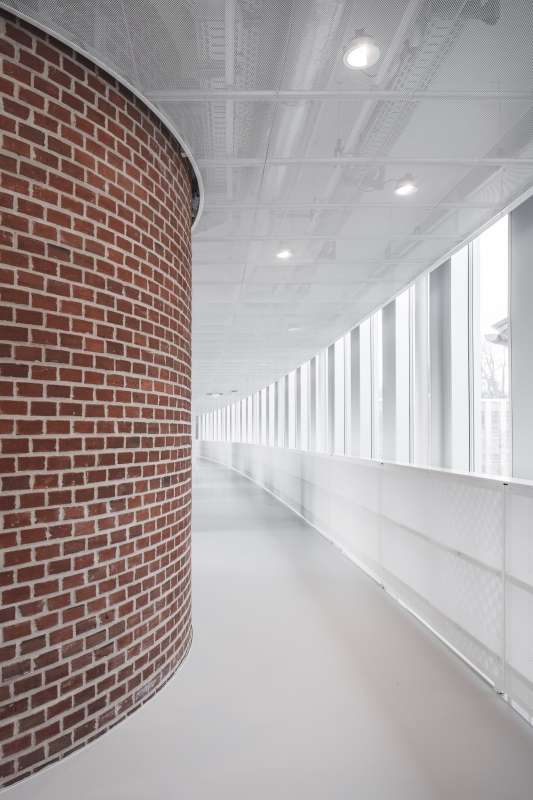 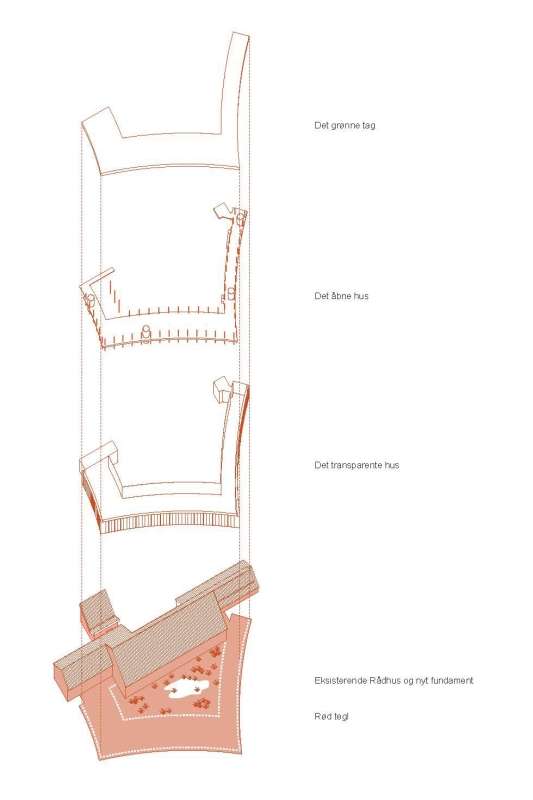 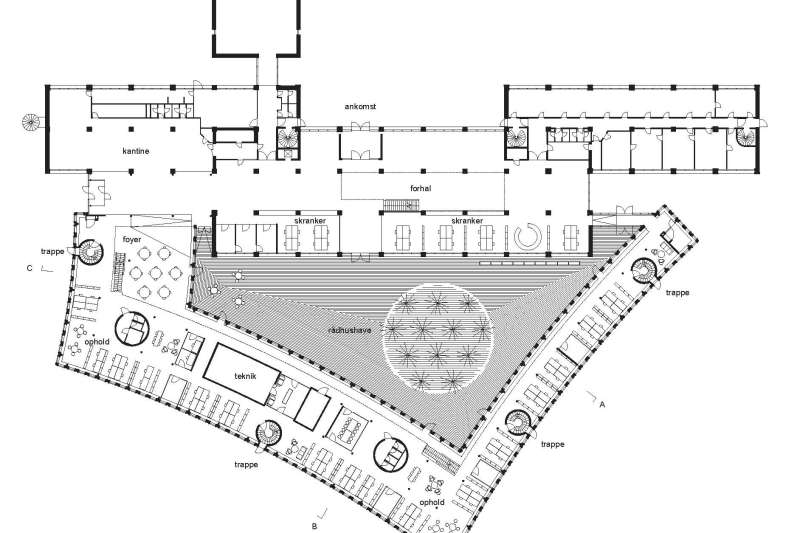