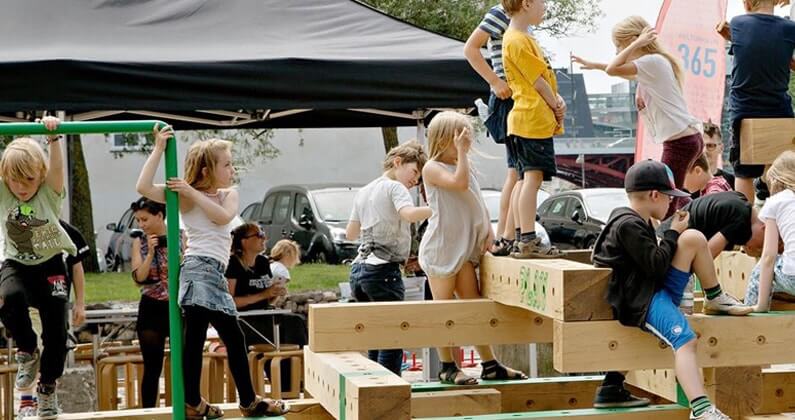 In summer 2016 the Danish Architecture Center and the plaza in front of the building was converted into a summer, “movement destination”. Outside, in a temporary arena we invited everyone who feels inclined to try their hand at totally new forms of movement. Meanwhile, inside we opened a major exhibition, which explores the subject of movement in the city. During the run of the exhibition we organised a number of specialist events, in which both professionals and anyone with an interest met up to discuss “next practice” – for example ‘What is the next step to take when it comes to movement in the city?’

Once upon a time, movement and exercise took place in function-specific settings, such as gyms and facilities designed for the purpose. But in recent years movement has crept into our everyday lives and occupied public spaces.

Today the city represents an arena for all sorts of movement for people of all ages. Street sport has made its impact, and playful installations and

flexible sports facilities are springing up all over the place. Movement has assumed a prominent role in the city. But it is also found in local pockets and communities, which can be difficult to find your way around in.

“Let’s play” was set out to tell the story of the informal and non-organised movement, which has hit the city in recent years, and to provide Danes with an opportunity to try their hand at new urban forms of movement.

The goal was to inspire children, young people and adults of all ages, together with architects and planners, to look at movement with different eyes: not as something you do in specific places and at specific times, but as something that can be a natural and integral part of the city – a source of joy, freedom, fun and fellowship across gender, ethnicity and age.