A run-down area got a new park thanks to local involvement and municipal goodwill.

A lawn, a forest, a climbing portal, two banana-shaped earthen walls, and lots of local involvement: these were the key ingredients in transforming a former industrial site into an attractive park and playground. The story of BaNanna Park is an uplifting story of how a municipality saved an undeveloped plot of land from eager property investors and instead created a green oasis for one of the country’s most densely developed districts.

In late 2004, plans were announced to construct a residential complex on an undeveloped grassy plot near Nannasgade in Nørrebro. The area had long been used by local daycare centers and schools as a supplement to crowded playgrounds and schoolyards. Therefore, the staff of Rådmandsgade School, local parents and other activists collected 2,300 signatures on a petition against the project. A short time later, the municipality purchased the site and placed it under the auspices of the newly-launched Mimersgade district urban renewal project.

Through meetings with local residents and dialogue with the daycare centers and schools, plans were drawn up for a neighborhood park. The park was to serve as a green oasis in the neighborhood and as a play area for local children and youth.

Prior to the renewal project, the site on Nannasgade was known as the “poison site” because of the oil refinery that previously stood there. A soil decontamination project was carried out to make it safe for children to play in the park, and the name was changed to the more inviting “BaNanna Park”. This name inspired the architects in the design of the park’s trademark: two banana-shaped earthen walls in the park, one of which is covered in a bright yellow sports coating to make the connection clear to all.

The jungle, the Lawn and the Square

In the spring of 2010, locals rejoiced in the opening of BaNanna Park. The finished park is divided into three sections: the jungle, the lawn and the square, each of which serves a given function.

The jungle is a collection of existing trees and newly-planted cherry trees, which give the park even more color in the spring. A handful of bamboo bushes have also been planted to create the right jungle atmosphere.

The lawn is primarily intended to be used as a ball field, but this is also where you will find the characteristic bananas, which can be used for play or as spectator seating for soccer matches, etc.

The square marks the entrance to BaNanna Park with a 14-meter-tall climbing portal. A diversity of urban fixtures and furniture encourages visitors to stick around for a while.

A paved loop running through the park is used by cyclists, roller skaters and others. The path is lined with lamps to prevent dark and dangerous stretches, and a couple of large masts with colored lights give the park a magical glow in the evenings.

BaNanna Park is one of many projects aiming to create more green spaces in Nørrebro. For example, a new “pocket park” is found just a stone’s throw away on Odinsgade. Further out toward Nørrebro Station, the Superkilen park strip was inaugurated in June 2012, and an activity park in the former DSB train yard opened in autumn 2012. Together, these projects are helping to spur positive urban development in a neighborhood that used to be rather run-down 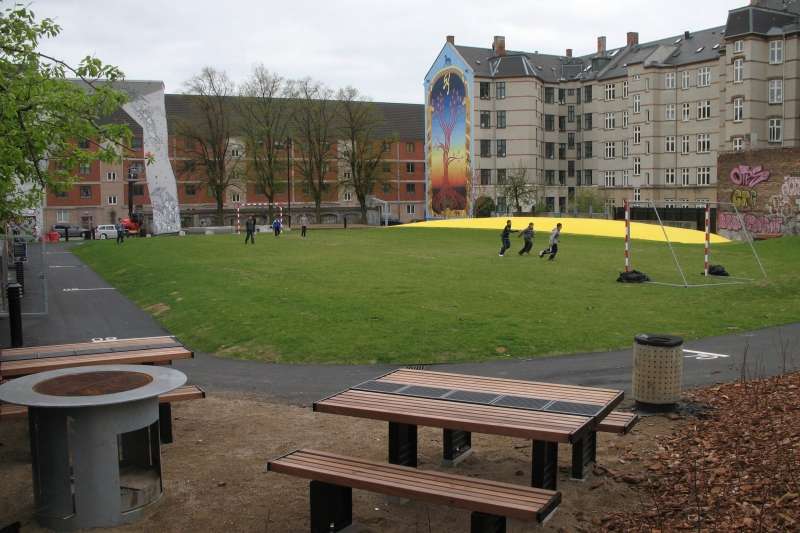