Two high-rises of no less than 99 and 86 meters, respectively, will provide housing with amazing views in the old Islands Brygge district.

A sensational new urban area is popping up right by Islands Brygge Metro station, Ørestad and Søndre Campus. Two distinctive high rises of no less than 99 and 86 metres respectively will be Bryggens Bastion’s eye-catching landmarks, and home to some of the best views of the city.

The 23-storey-high east tower is shaped like stacked boxes in bricks and golden aluminium that capture and reflect the sunlight. The west tower will have 30 floors and be a light building characterised by large windows. From small student-friendly flats to three-storey townhouses and exclusive apartments, the buildings will house a miscellaneous group of people in both the towers and the eight residential buildings in between, as a reinterpretation of Copenhagen’s classic blocks.

Bryggens Bastion is a scaled-down version of a previously unrealised architectural plan: BIG was initially set to build nine pyramid-shaped high rises and a mosque here, but that project was set aside in 2014.

From that point on, the former military exercise area has been the city’s largest deserted space, having been consecrated as a memory of the past since the 1970s. With the construction of Bryggens Bastion, this history will be honoured when the old cannons are re-established in its public green urban oasis. 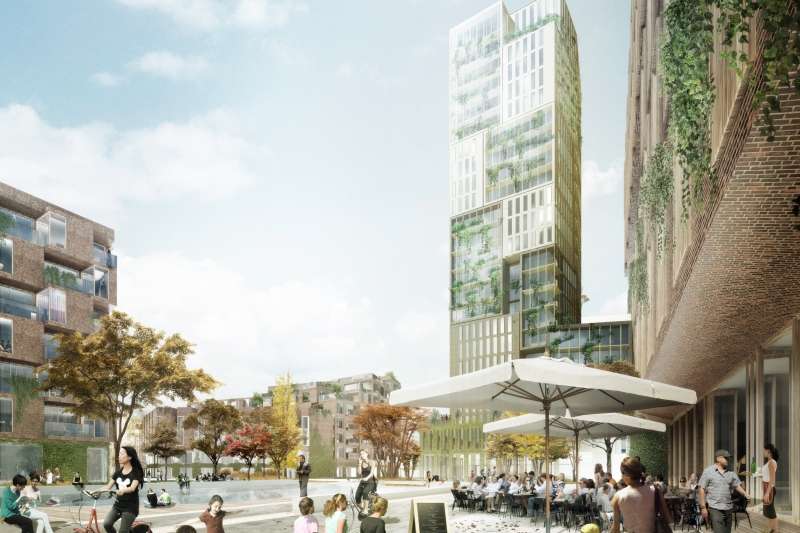