Hauser Plads in old town Copenhagen is a playground, park and municipal office building all in one unusual design. The entrance to the offices is underground.

Nicknamed ‘the Aalto Vase’, the futuristic playground at Hauser Plads is a stone’s throw from the busy shopping street Købmagergade. Sci-fi in its rounded, undulating shapes and with unique features such as two large metal domes, swings, a sandpit and climbing poles, the playground is an urban paradise for kids. Its surfaces are thoughtfully designed in materials like real and artificial grass and granite covered in child-friendly rubber.

It’s said that every Friday during the 1830s and ‘40s, the Danish philosopher and father of Existentialism, Søren Kierkegaard, met his fiancée Regine at Hauser Plads. Some of the buildings from that time remain, and have been the cause of a whole new, innovative way of rethinking architecture and buildings in Copenhagen. How does a city utilise existing spaces without interfering with their densely packed historic surroundings? In the case of Hauser Plads, you build downwards instead of upwards.

This is why, below the magical square, an underground parking facility was converted into a green courtyard and office spaces to house the city’s Cleaning Facilities Centre. Despite being subterranean, the offices get an optimum influx of daylight due to an extensive hole in the ground, while courtyards serve as an outdoor workplace and a space for rest. 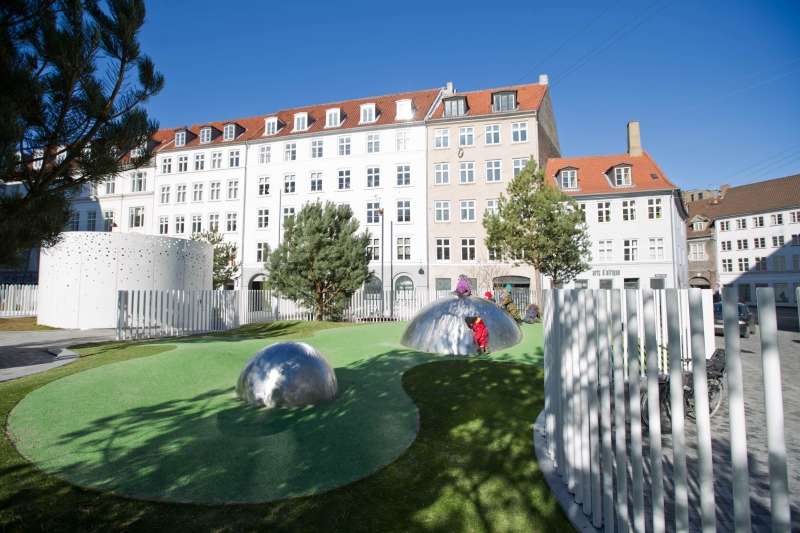