Architects love building with LEGO bricks. So what happens when you task one of the world’s leading architects with creating an entire building out of LEGOs? The answer, of course, is LEGO House, a building designed by renowned Danish architect Bjarke Ingels and his architectural firm BIG.

It’s not surprising to learn that the first meeting to discuss the design of LEGO House took place at a round table with a pile of LEGO bricks in the middle. One by one, they stacked bricks representing various functions until at last they reached the final design of the new LEGO House.
The beloved small LEGO bricks can be combined in countless ways, unlocking doors to infinite ideas and worlds of building and play – and ideally suited for the realm of architecture.
The building plays a key role in the vision of making Billund, Denmark “The Capital of Children”. LEGO House is the ultimate venue for bringing together LEGO enthusiasts young and old. From the outset of the project, the ambition was to create a gathering point on the central town square in Billund. Consequently, all of the bricks with public functions – such as restaurants and shops – are located in conjunction with a publicly accessible area on the ground floor.
Stacked on top of the ground floor are colored bricks corresponding to the exhibitions inside, and each brick has its own rooftop terrace or playground. At the pinnacle of the building is the masterpiece brick, the last brick put into place before inviting all the world to come and play – in LEGO scale and real-world scale.

The small bricks are not only reflected in the large bricks housing the galleries. The familiar scale clearly permeates every aspect of the project. Pick up a brick in the exhibition and you will notice how it resembles the brick in the wall, the brick on the floor, and the brick you are standing in.
The masterpiece brick is home to the building’s art gallery, with lighting coming through the eight holes in the top of the iconic 2×4 brick – the brick that transformed the LEGO brick from a stacking block to a building block, using a tiny detail whose impact proved almost unfathomable.
It’s hardly a coincidence that Denmark has one the world’s highest number of trained architects per capita – architects that consistently win competitions around the globe, cementing the reputation of Danish architecture worldwide. Bjarke Ingels started with a LEGO brick, as did so many others.
Viewed from ground level, the building’s facade consists almost entirely of white ceramic tiles, providing a subdued contrast to the multicolored interior. All of the furniture and exhibitions are made with standard LEGO bricks. The exhibitions are divided into four color-coded zones, each corresponding to a specific element of childhood learning: Red is the creative, green is the social, yellow is the emotional, and blue is the cognitive. 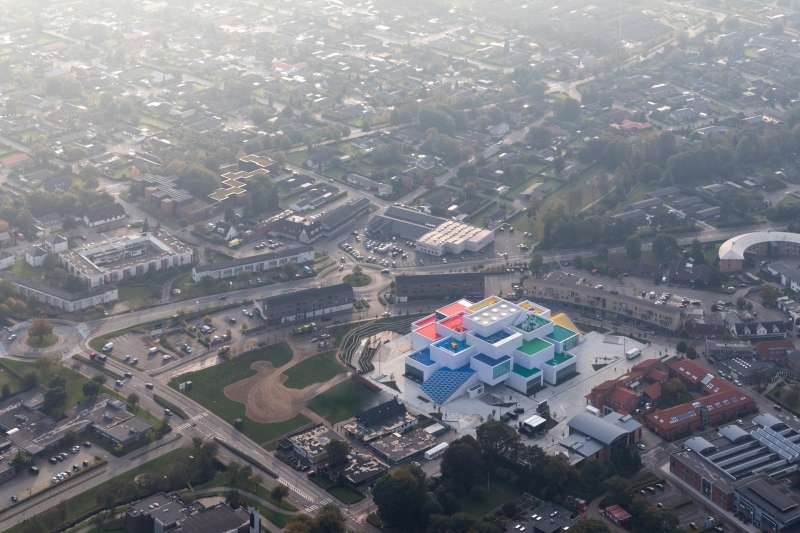