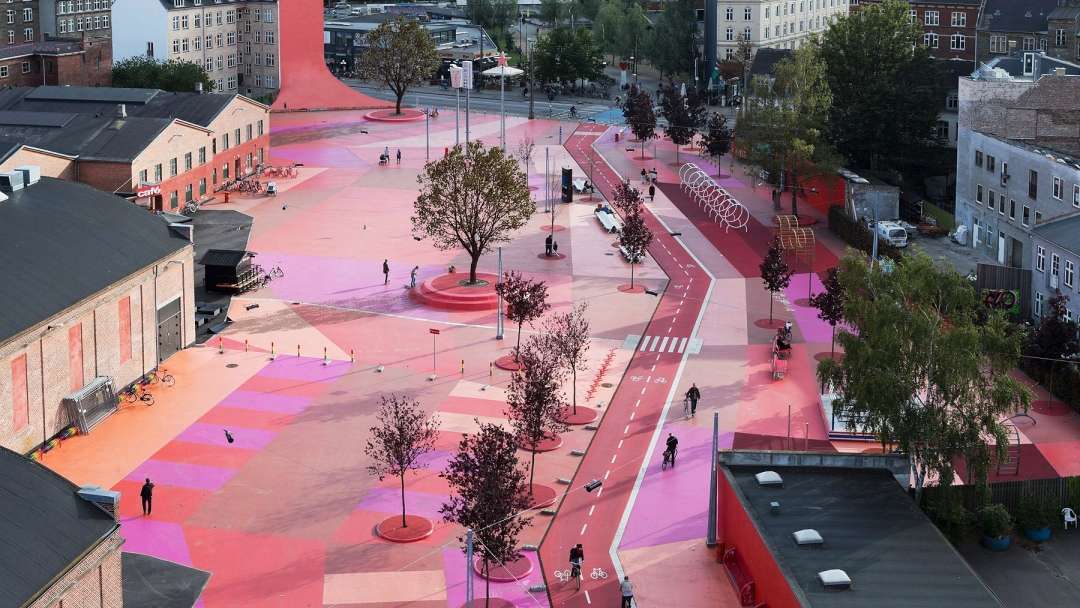 A colourful public park in Copenhagen is a celebration of diversity. Superkilen is merging architecture, landscape architecture and art into an urban space.

Since its inception in 2012, Superkilen has been a source of inspiration for other public space projects. It has attracted tons of local users as well as tourists and is very likely the most photographed urban space in Copenhagen.

But it has been equally debated, mainly due to its visual diversity and for its unique conception of public space, based on an alternative method of participation of local residents and neighbours.

The concept of the park was developed by the art group Superflex in collaboration with the architecture group BIG, the landscape architecture firm Topotek 1, but the design required also direct involvement of local residents.

SUPERFLEX used their own strategy of ‘extreme participation’ to engage residents of an area known to be one of Copenhagen’s most diverse neighbourhoods, and asking them to nominate specific urban objects from their countries of origin or their travels abroad. Additionally, SUPERFLEX traveled with five groups to Palestine, Spain, Thailand, Texas and Jamaica in order to acquire their nominated objects and install them in the park. As a result, 99 objects from 59 different countries share an urban space as expression and celebration of the diversity existing in the neighbourhood, and the city.

The Danish name Superkilen can be translated to “Giant Wedge”, even if unnecessary, as the name is well recognised across languages and countries.

Superkilen’s three zones exist around a long path and cycleway, following a colour code that somehow creates a connection between very diverse objects.

In the Red Square, Russian and Chinese neon signs share the space with a Jamaican sound system, circle swings from Irak and a boxing ring from Thailand. Shades of red and pink spread across the objects, merging the surroundings without hiding the diversity of furniture and objects. From the trash cans to the blooming trees, red remains as the common trait, together with the selection process of the objects, all handpicked following the direct wishes of users and neighbours.

Next is the Black Square, a more intimate space, remarkable for the dynamic white lines spread over its inky ground, where chess tables and barbecue grills rub shoulders with a Moroccan fountain, Chinese palm trees and an oversized black Japanese octopus playground.

Then, finally, the Green Park unravels between grassy slopes, pavilions and contrasting benches and street lamps. A bull silhouette from Spain and a doughnut-shaped sign from USA overlook diverse areas to rest, play, grill or exercise while exploring urban objects from many different countries.

Across Superkilen’s total area of 30.000 m2 , everything – from rubbish bins to manhole covers and benches – has, like the area’s residents, travelled from far and wide to call this city home. 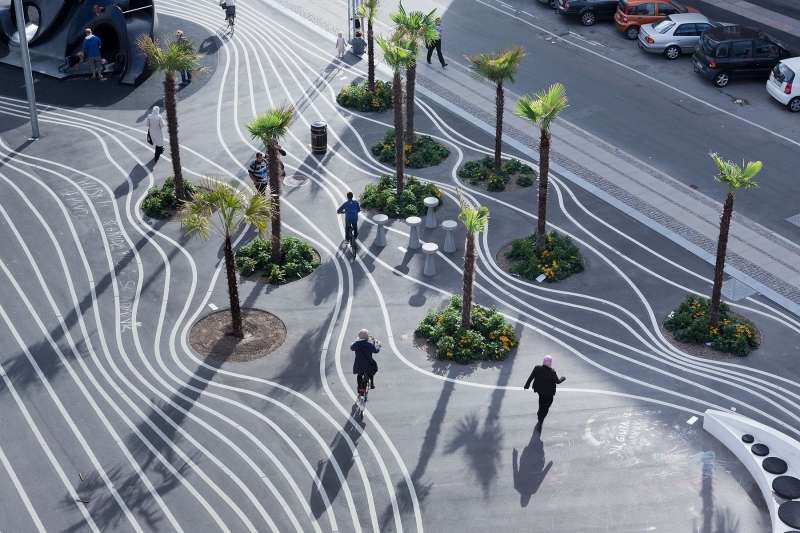 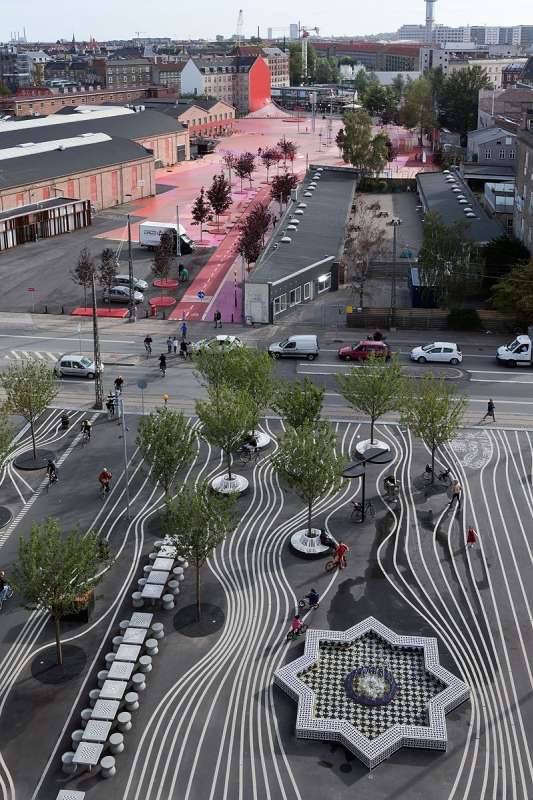 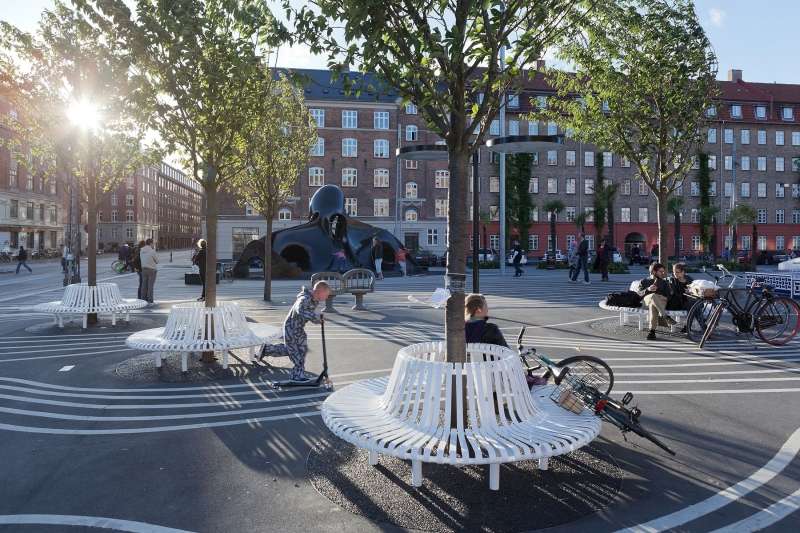 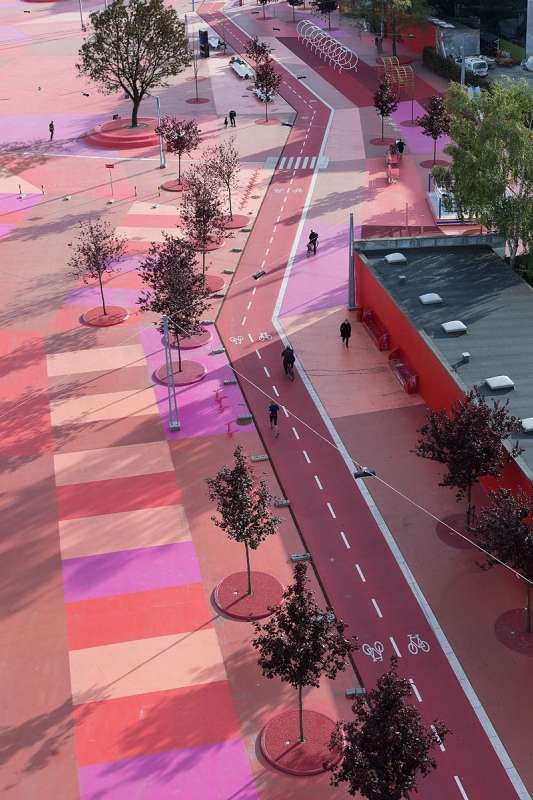