Vandflyverhangaren (The Hydroplane Hangar) has gone from being a workshop used by the Danish Navy to an ultramodern office building.

As the name indicates, this unique building was original used for the renovation of hydroplanes (planes that can land on the water). The building’s enormous roof forms a half arch over the width of the building, which is one of Denmark’s earliest large prestressed concrete structures. This means that large concrete arches bear the weight of the roof.

Vandflyverhangaren was built in 1921 and designed by the architect Christian Olrik. The hangar is located at Margretheholm, which is part of Holmen. Holmen is a series of islands between Zealand and the northern tip of Amager. From 1690 to 1993, these islands served as the main base of the Danish naval fleet. During World War I, a hydroplane station was built at Margretheholm, where the Navy’s Airway Services built and repaired hydroplanes until 1950.

After 1950, a number of the Navy’s schools moved into the facilities at Margretheholm, and the hangar was transformed into an artillery school. From 1972 to 1996, it served as a military workshop, after which the Navy relocated most of its operations from Holmen.

All workers in the building are based in the hangar’s large central room. Here they have offices on the ground level and on staggered, free-hanging decks held up by white-painted steel frames. On the top deck there are hammocks where workers can take an afternoon nap. This room is equipped with long white curtains that can be used for shielding and to divide the office landscape up in different ways. Employees can also seek refuge in walled-off offices at the sides of the building. The reception, conference rooms and cafeteria are all part of the holistic design.

The building’s huge hangar port with a sliding door has been retained and is still in operation.  Thus, the building’s back facade can be opened up toward the terrace and outdoor green spaces.

The repurposing of the hangar was largely carried out according to the existing building’s design, retaining the open glass sections in each end wall, the high ceilings and the visible concrete structures. Many small details have been added that refer to the original function of the building, including a water basin and floor labelling for airplanes outside the main entrance. 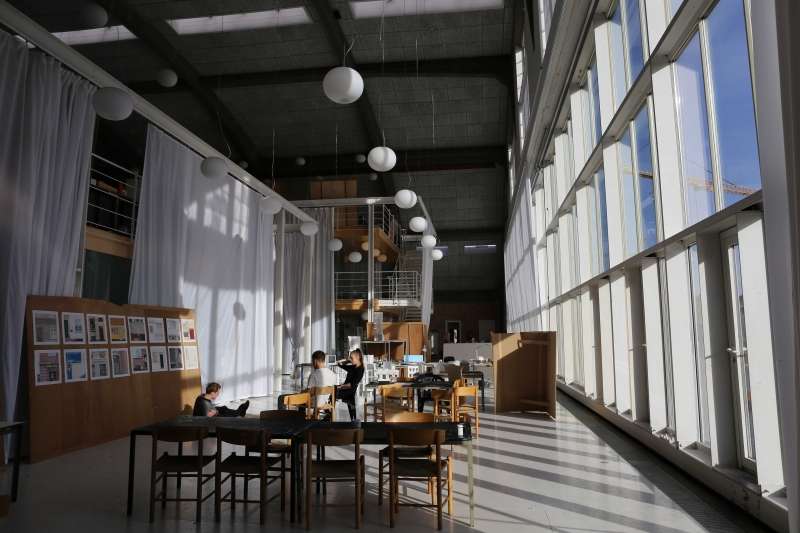