Danish Buildings Thru the Eyes of Donald Duck 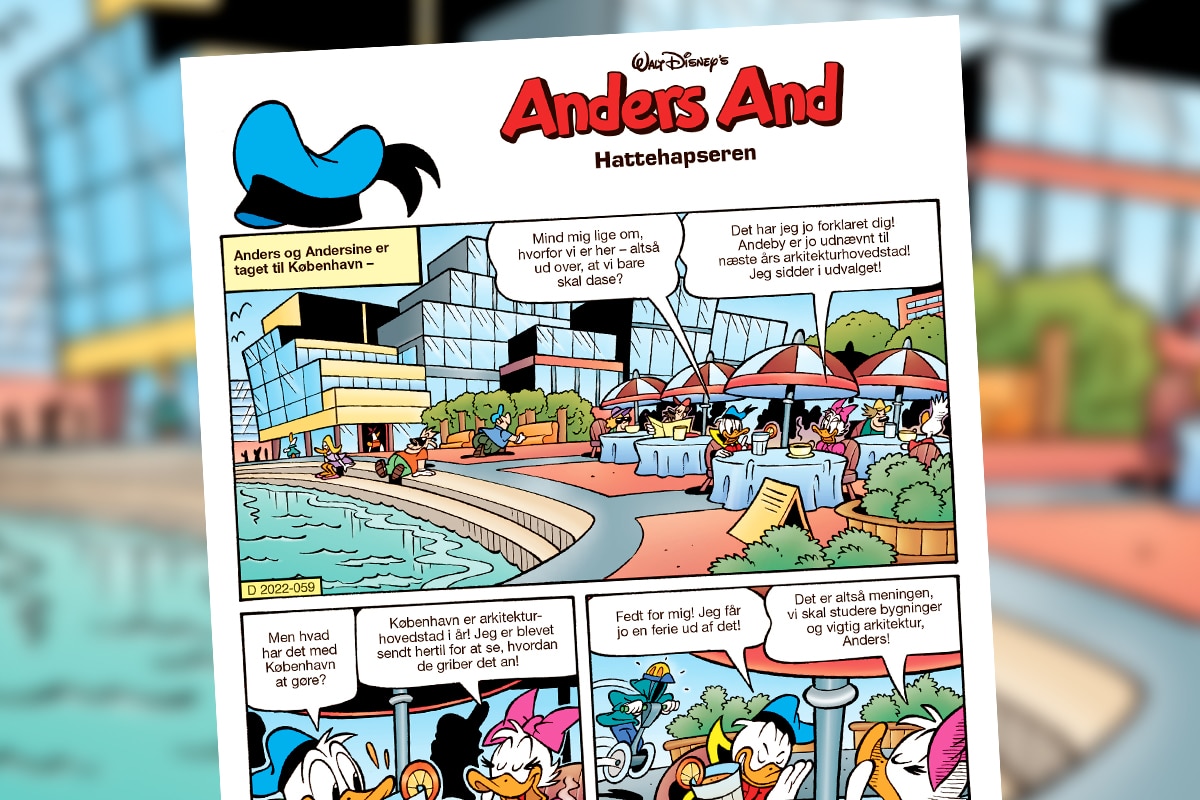 Danish Buildings Thru the Eyes of Donald Duck

Copenhagen is the World Capital of Architecture 2023. Donald Duck wanted to join in the fun, so some of the most famous buildings in the Danish capital have been “cartoonized” in honor of his visit. Join Donald and Daisy on an architectural tour of Copenhagen and other parts Denmark and learn more about what architecture is and what it does for you! 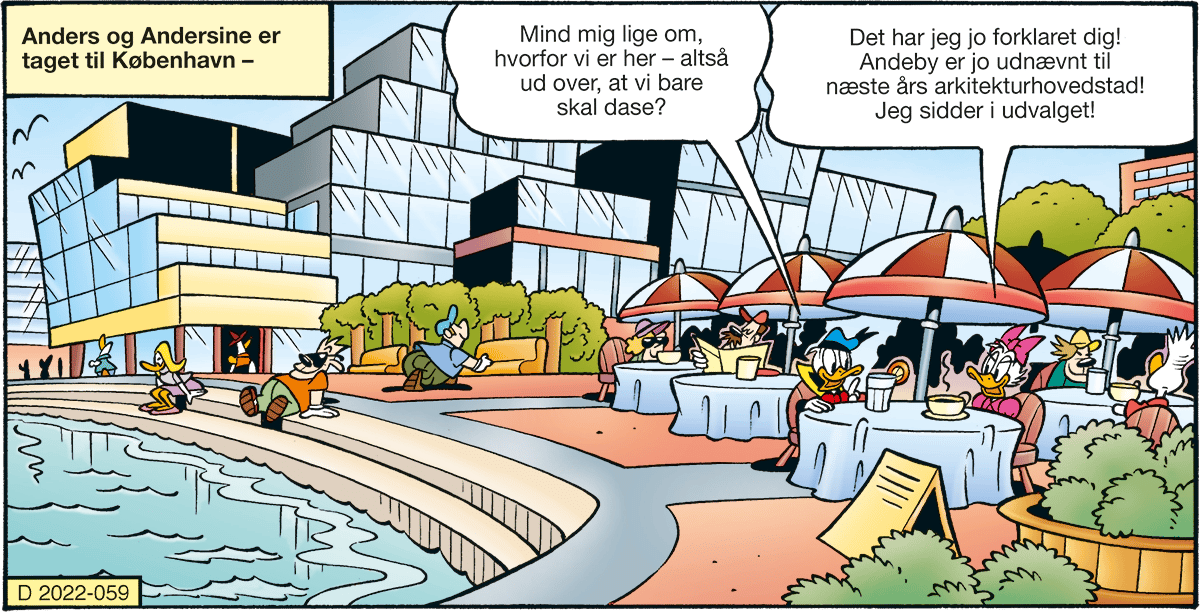 The Danish Architecture Center (DAC) calls BLOX, in downtown Copenhagen, home. There, you can see exhibitions about architecture, explore your creative side in the workshop, and whoosh down a 40-meter slide. BLOX looks ultra-modern and stands out from the old buildings around it. Building it took as much steel as the Eiffel Tower – just over 7,000 tons. The facade of BLOX is mostly made of green glass, so it fits in with Copenhagen’s famous green spires. 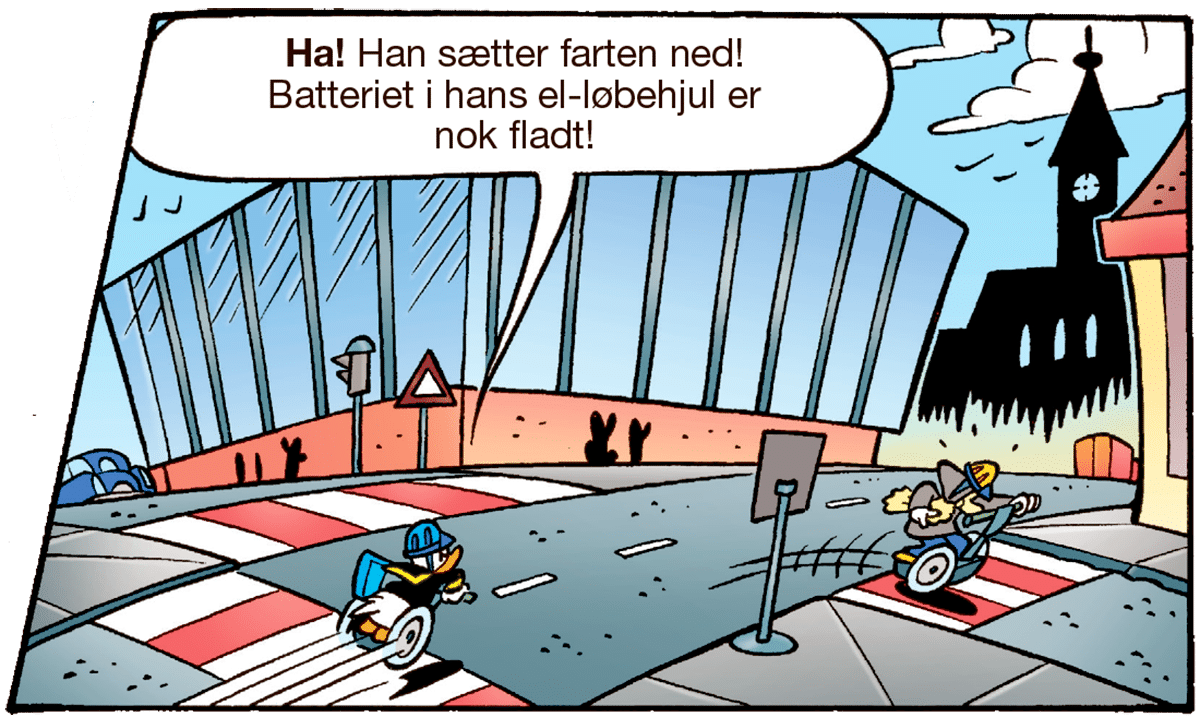 You could call Nationalbanken Denmark’s piggy bank. Just like Scrooge McDuck has his vault full of gold coins, Denmark has Nationalbanken. The people who work there look after the country’s money. A very famous Danish architect called Arne Jacobsen designed the building.

Axel Towers and the Circus Building

Just opposite Tivoli in Copenhagen is Axel Towers. It’s made up of five round golden towers of different sizes, with a small urban garden in the middle. Across the street is the Circus Building – so-called because clowns and acrobats used to perform here in the old days.

Unless you’re in the mountains, the desert or at the South Pole, you can’t escape architecture. It’s everywhere! It’s the ceiling you see when you wake up. It’s the bike path you use on your way to school. It’s the classroom. It’s the sports hall, the lampposts, the playground. It’s the window in your bedroom – and the streets and buildings you see before you close the curtains at night. Architecture is everything from the smallest building to the biggest megacity.

Because it’s everywhere, it’s really important that architecture is good. And good architecture solves lots of problems. It makes room for whole families, even in small homes. It makes you feel good at school, which helps you learn. It gives you places to play basketball or ice hockey. And it means that if you have a little sister or brother, they’ll be born somewhere nice and safe.

To make sure architecture does all the things it has to do, architects must think carefully about what they plan to build. Who will use the building? Why will they use it? What will they use it for?

Can architecture help the climate?

Sadly, architecture makes a bit of a mess. A lot of the pollution we generate is from building things. As part of the problem, architecture needs to be part of the solution, too – for example, reusing bricks, windows, and wooden floors from old buildings to build new ones. Architects can even reuse whole buildings instead of making new ones. And architecture can help bring more nature into cities, like green parks, rooftop gardens and balconies. 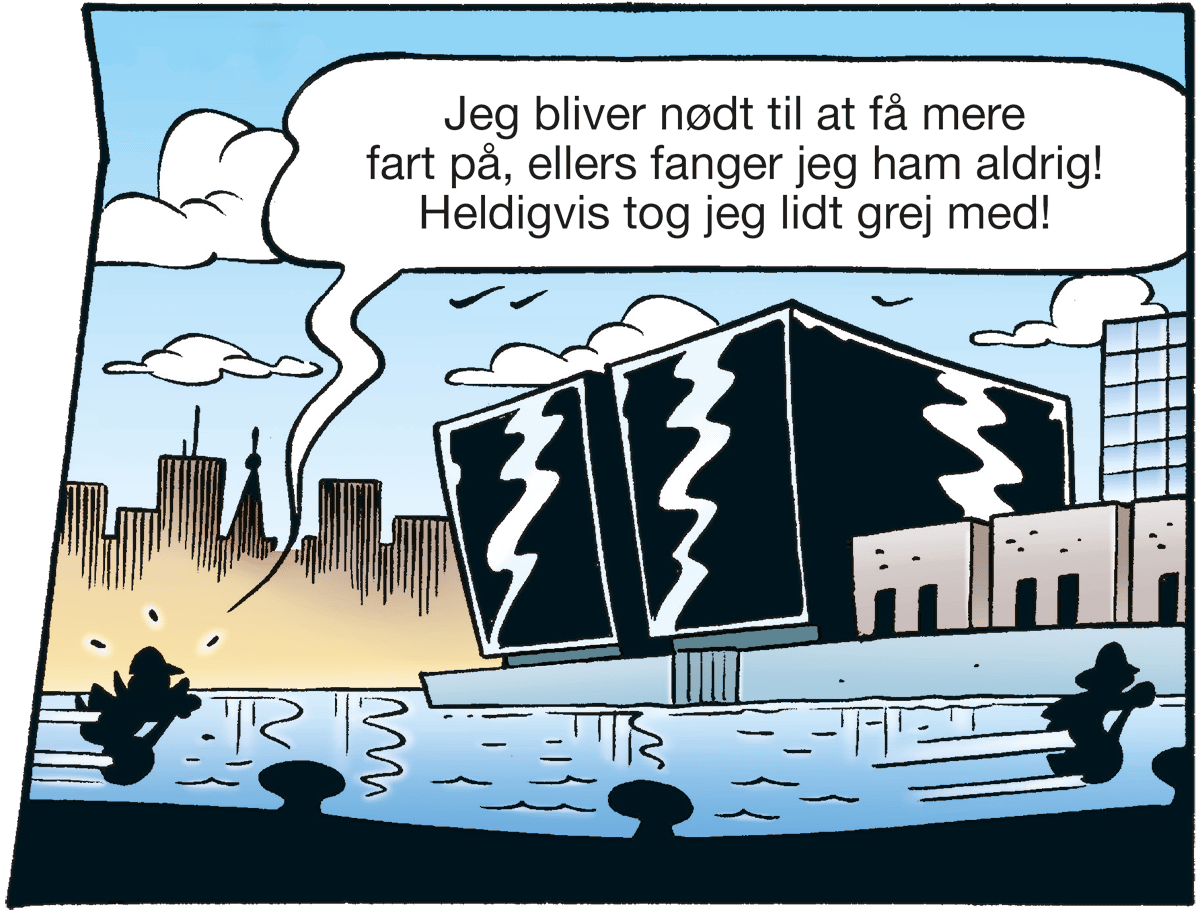 The Black Diamond is really modern looking and leans over Copenhagen Harbor – looking as if it might topple into the water. It is attached to a very old building – and together they form the Royal Danish Library. Luckily, it’s not just royals who get to borrow books from it. Everyone’s welcome!

Børsen is almost 400 years old. It was built back when Christian IV was king of Denmark. He loved architecture and had many of the great buildings in the city built. It’s easy to spot, thanks to the cool tower with four dragons winding their tails around the spire. In the old days, traders met here to decide what things should cost. 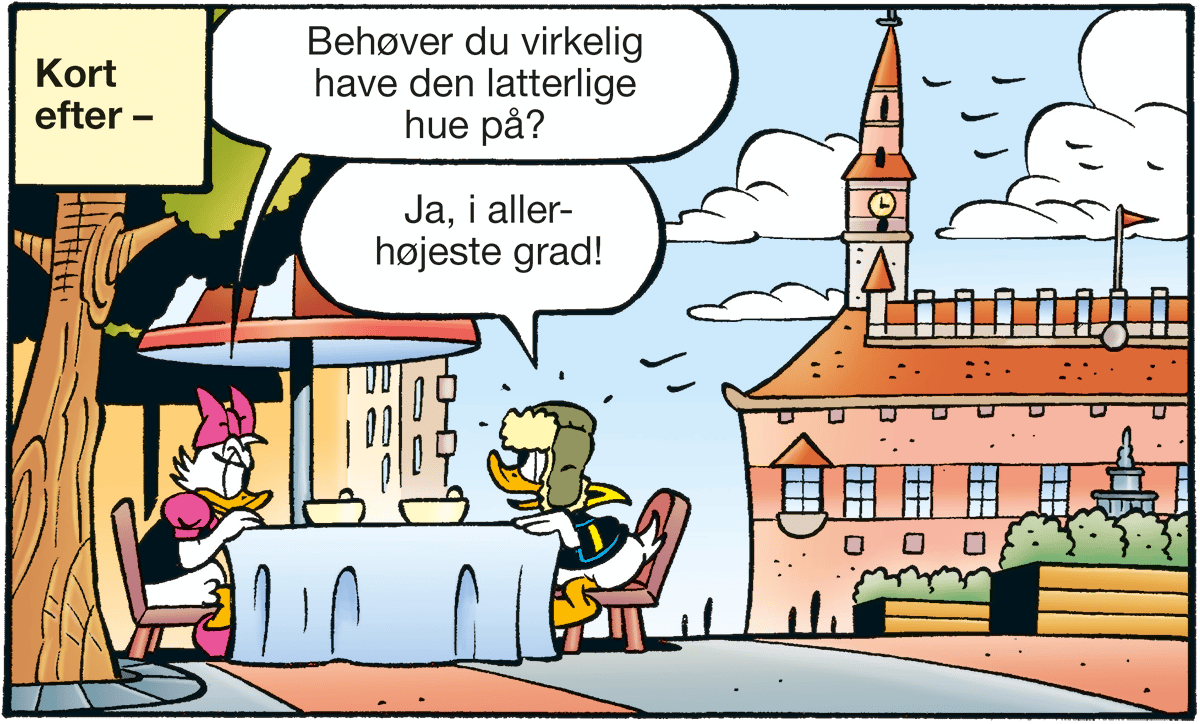 The City Hall is over 100 years old. You’ll find it on Rådhuspladsen, City Hall Square (duh!), in downtown Copenhagen. The Lord Mayor works here. Above the main entrance is a golden statue of Absalon, the founder of the city.

Use all your senses:
How does it sound when you walk on the floor? 👂
What does a wooden house smell like? 👃
What does asphalt feel like? 🖐️
What does a brick taste like? 👅
How does an old copper spire look? 👀

What materials are used in architecture?

Here are some of the most common materials used to build:
🪟 Glass – see-through (and smashable!)
🪵 Wood – has warmth and smells good
🧱 Bricks – strong and stackable
🔗 Metal – takes a lot of weight and bendable
🏢 Concrete – strong and easy to shape 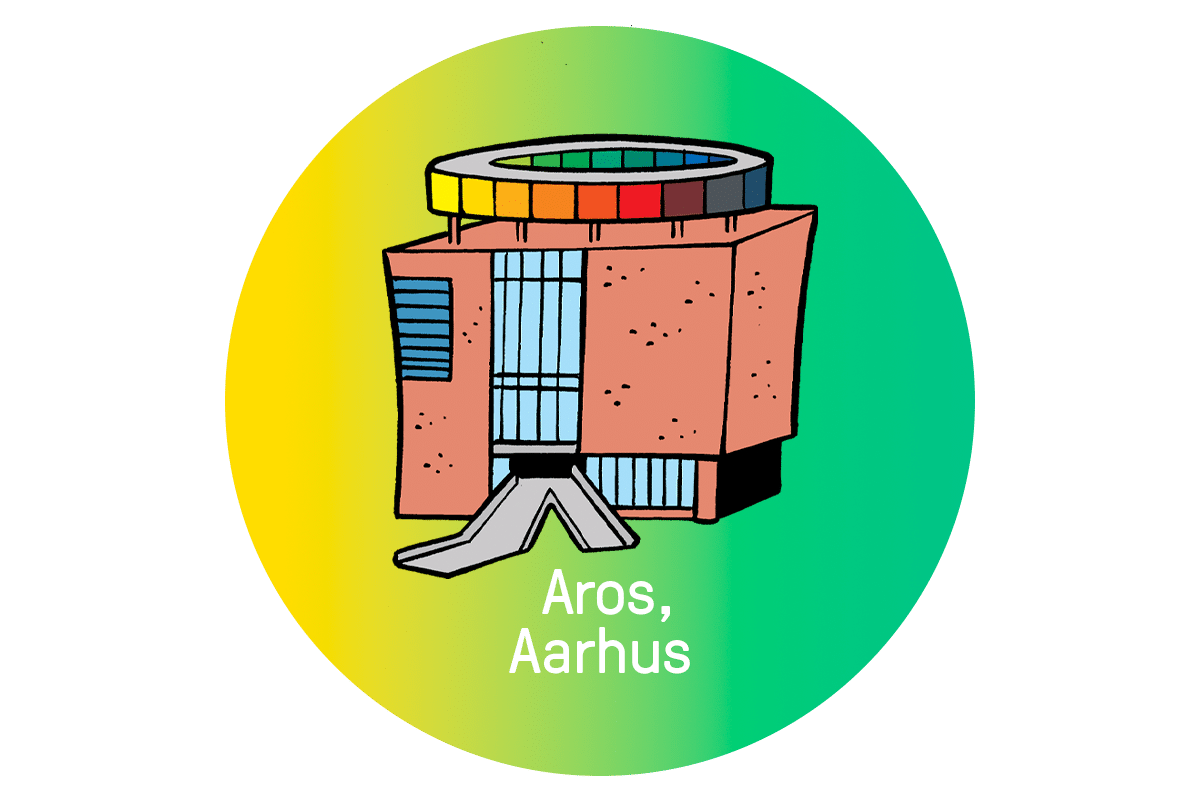 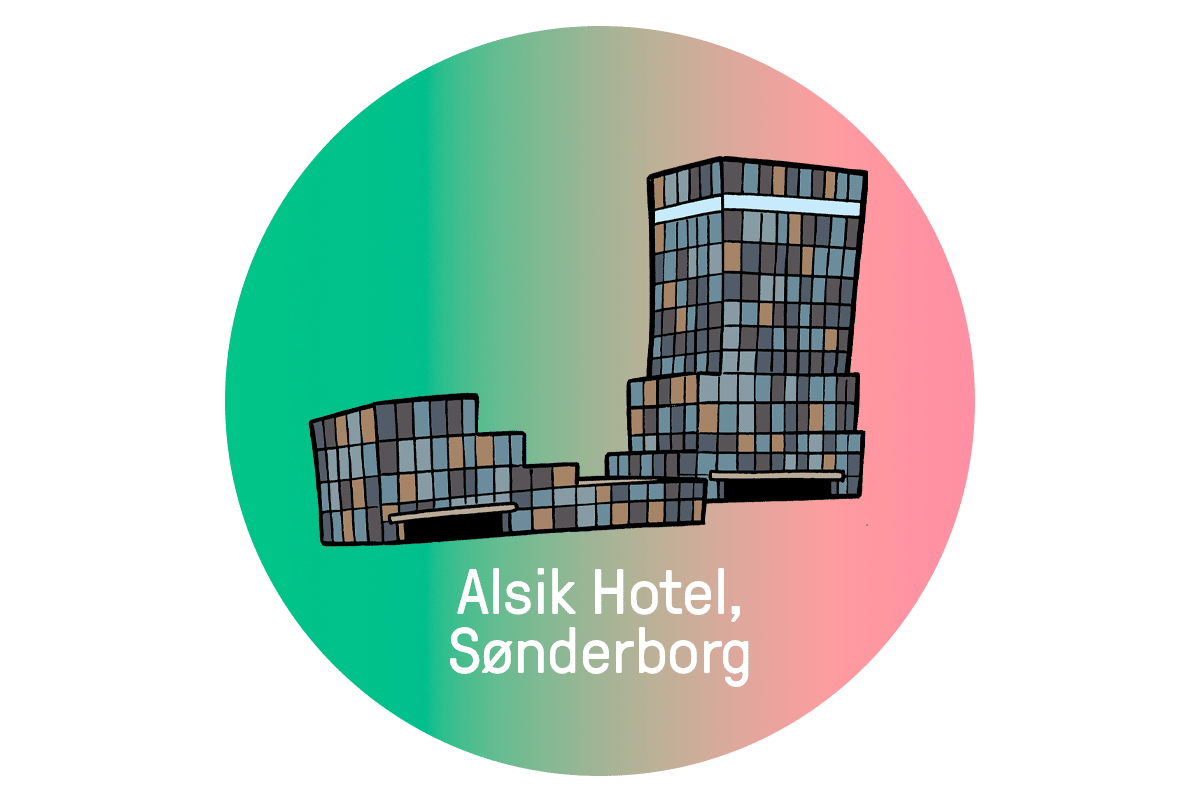 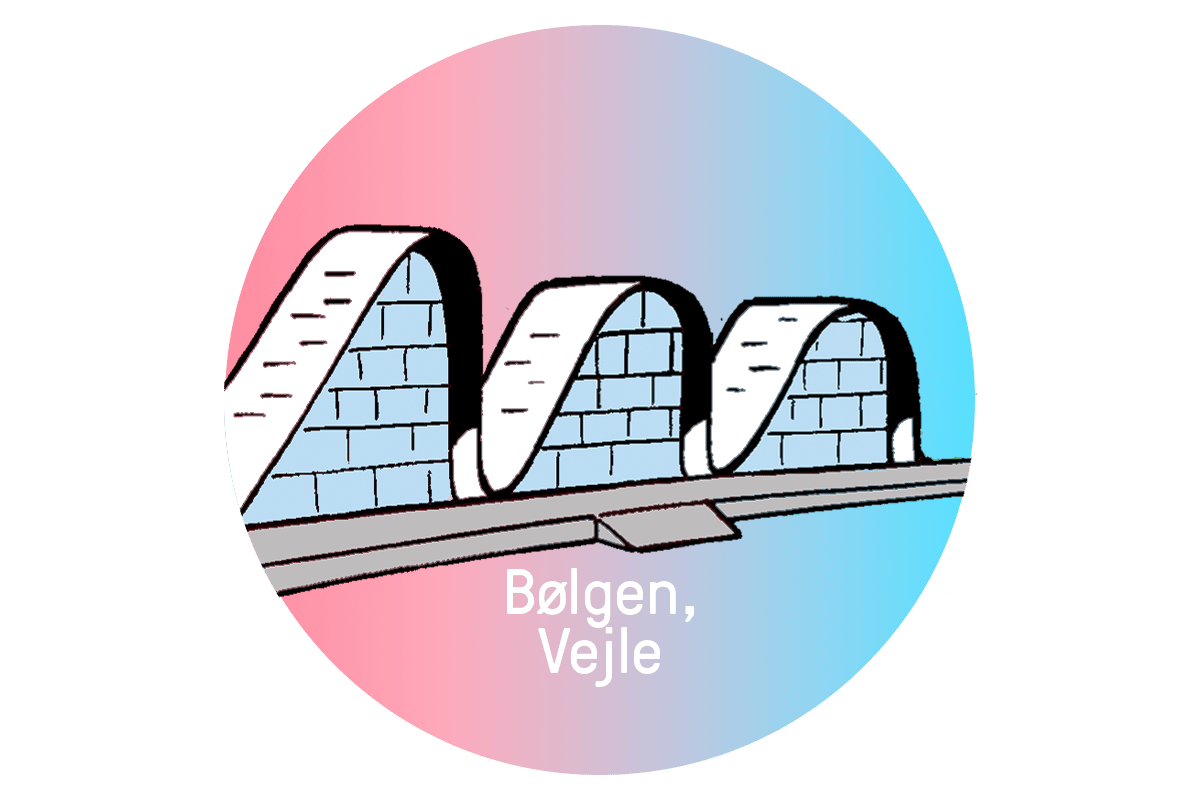 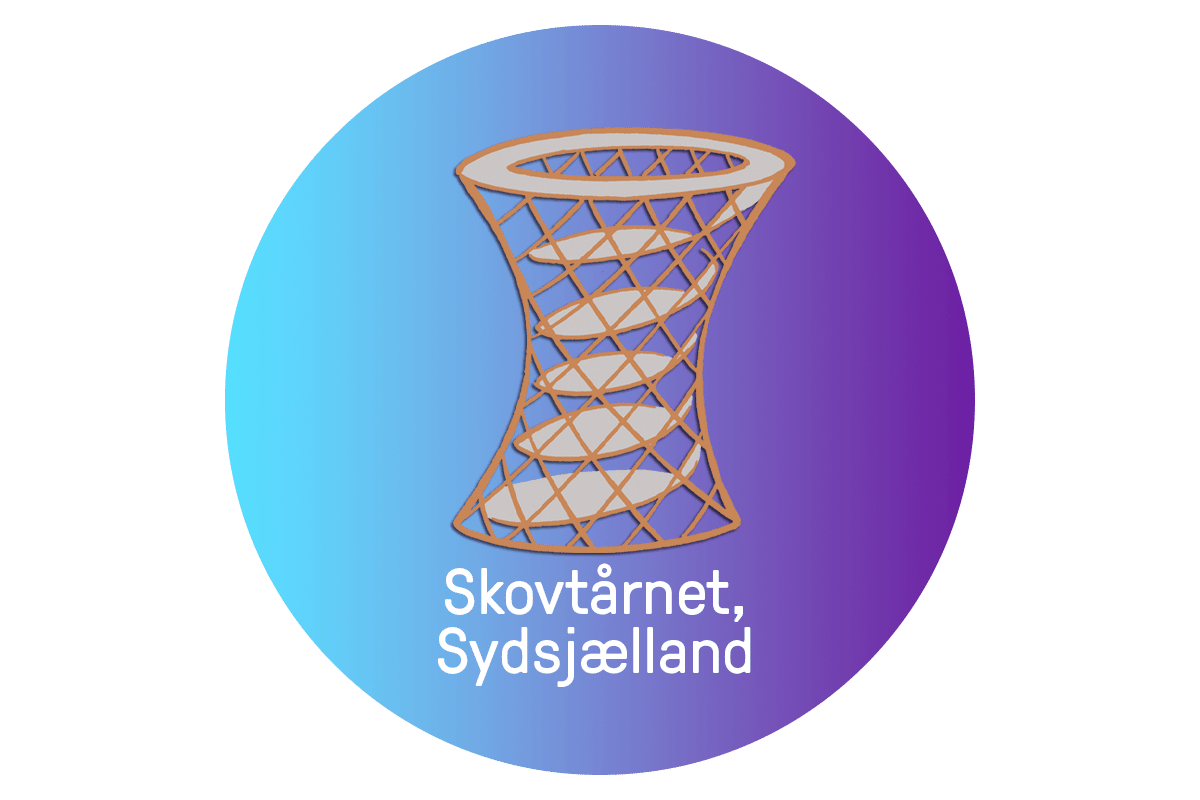 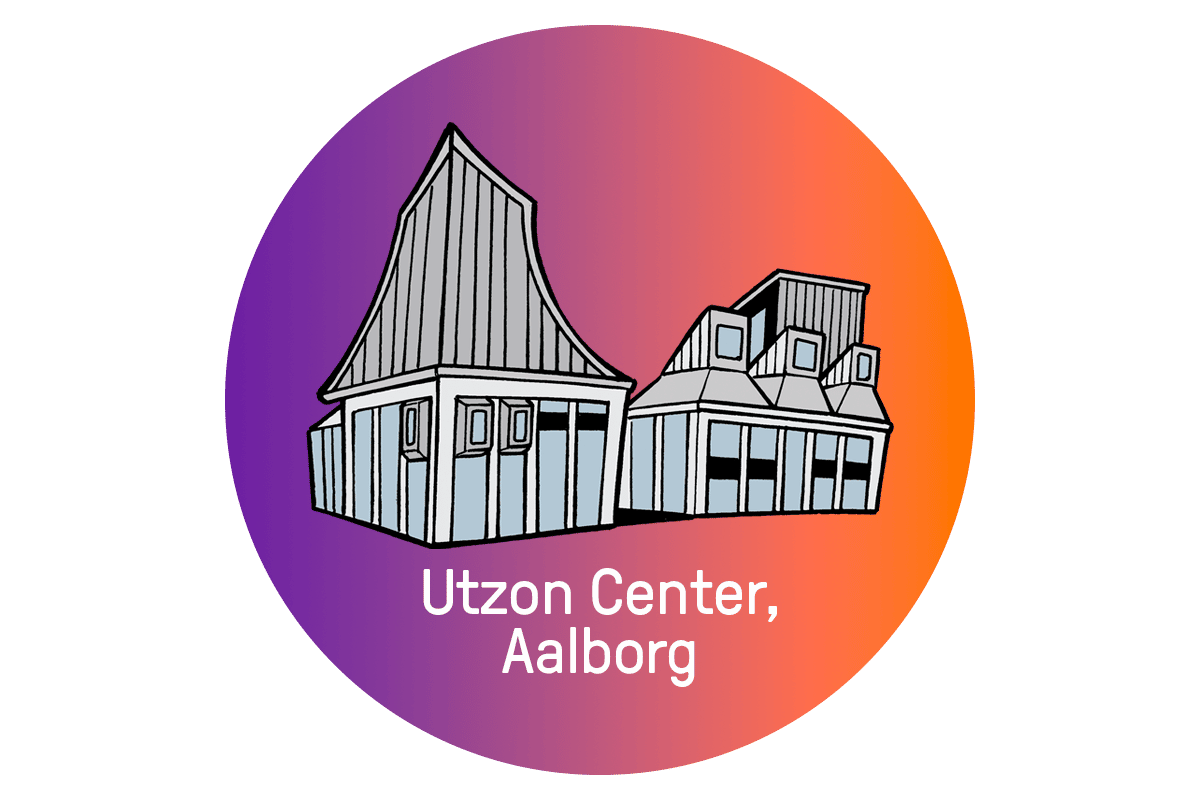 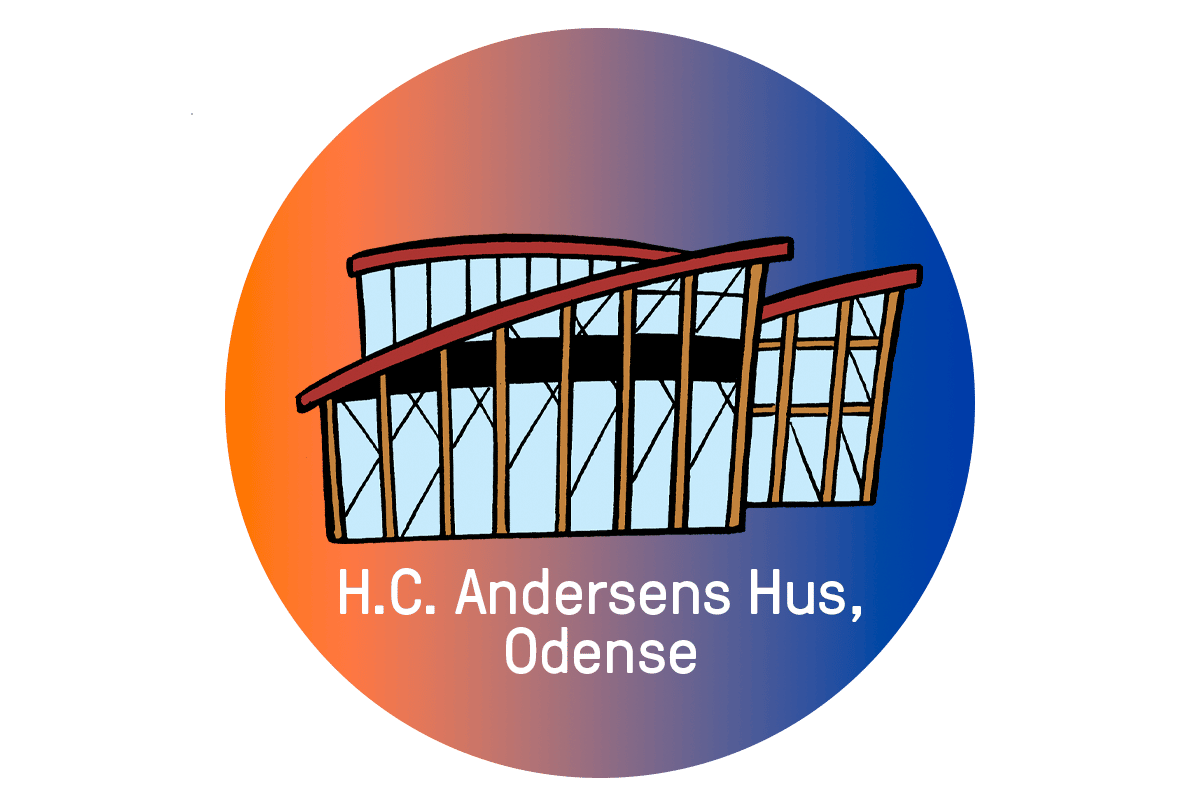 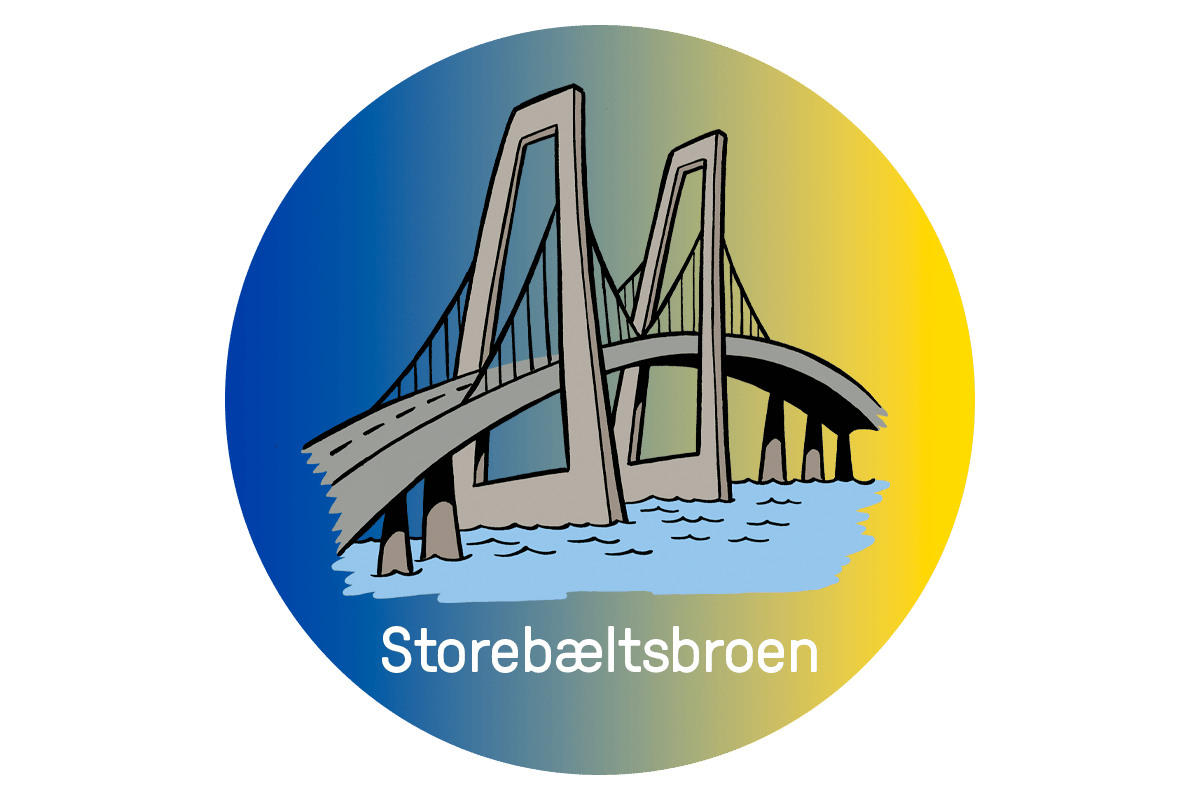 You can spot ARoS, a museum of modern art, a mile off. The bottom part is made of brick, but the top is a big glass circle in all every color of the rainbow that you can see from far, far away. You can walk around inside the rainbow when you visit the museum.

The Utzon Center has lots of exhibitions about architecture and design. It’s on the Aalborg waterfront and is named after Jørn Utzon – the Danish architect who designed the building. He also designed the Sydney Opera House in Australia, one of the most famous buildings in the world.

This 19-story hotel opened in Southern Jutland a few years back. Alsik Hotel was designed by Danish architects who wanted to use only Scandinavian materials. That’s why there’s so much wood inside! It’s one of the biggest hotels in the country.

Odense has a brand-new museum all about Hans Christian Andersen’s fairytale world. Andersen had a great imagination, so the building had to be imaginative, too. A Japanese architect named Kengo Kuma designed the museum. He’s great at dreaming up fun and playful buildings.

The Wave has a completely different shape than most buildings. Its curves make it look like (yeah, you guessed it…!) waves lapping on a beach. The people who live in it have nice views over the water.

When it was built, this bridge over the Great Belt was one of the longest in the world. So, it’s kinda big. And it’s kinda important too, because it links the islands of Zealand and Funen, making it easy for everyone to get from one end of Denmark to the other. Architects, engineers, and landscape architects all worked together on the project.

The Forest Tower (Skovtårnet) is a 45-meter-high observation tower in the middle of the forest. Half-way up, you can take a break and touch the leaves on the trees. From the top, you can see all the way to Sweden – well, on a clear and sunny day you can!