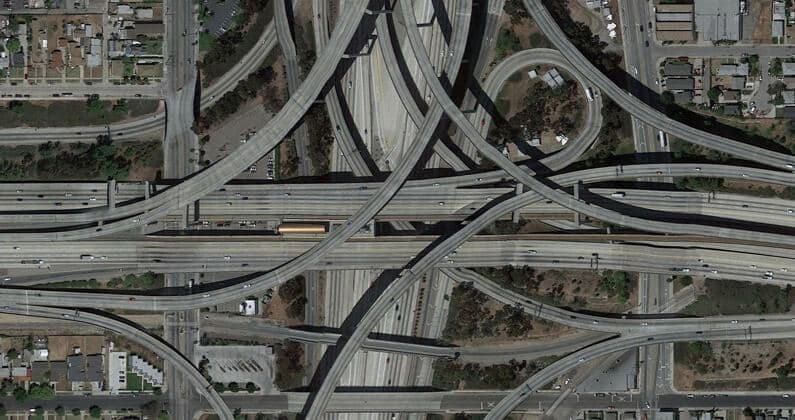 Mind the Earth was developed by the Danish Architecture Center in collaboration with architect and planner Kasper Brejnholt Bak.

The exhibition was developed in partnership with Rambøll and Damgaard-Jensen A / S.

The exhibition was supported by Realdania.

Can logging be beautiful? Seen from above, it creates the most delicate patterns, but the story behind it is scary – large parts of the rain forest are disappearing every day. The exhibition, “Mind the Earth”, at the Danish Architecture Center showed the Earth’s transformation, using selected photos from Google Earth, providing insights into how diverse, resilient, but also vulnerable our planet is.

Mind the Earth, mind it. Earth. My planet. Where I come from. I come from Earth. Mind that. Remind me about it.  From the text, Mind the earth by Morten Søndergaard.

There is something deeply fascinating about seeing the Earth from above. Suddenly you notice things you were not previously aware of. From an altitude of 10 kilometres, landscapes and settlements create patterns, which we have no idea that we are part of. Then, when we zoom in, it becomes clear that every place and every region has its own unique character and story. The exhibition, “Mind the Earth”, zoomed both in and out, as each of the selected photos from Google Earth told its own unique story about the state of the Earth: from scattered island communities to megacities and huge agricultural areas, which have to provide food for an ever growing population.

The exhibition dealt with four main themes, all focused on living and inhabiting: food, energy, transport and water. Through those themes the exhibition examined what the future looks like for people, cities and landscapes: what are we going to live on? How will we get from A to B? And where will our resources come from?

Each photo was accompanied by surprising facts and thought-provoking philosophy. The exhibition was the result of a close collaboration between the architect/urban planner, Kasper Brejnholt Bak from Rambøll and the writer, Morten Søndergaard, each of whom has his own personal approach to the photos: on one hand, the architect’s descriptive, factual point of view; on the other, the writer’s poetic, philosophical one. Together they created sympathetic insight into the universe of the images, suggesting what our world looks like at the moment, and what it might end up looking like in the future.

Google Earth as a democratic tool

For some time now, Google Earth has proved its worth as a new democratic tool for viewing, and learning about our planet.  But the really interesting question is: can a technological resource such as Google Earth provide us with new insights about the world we live in and maybe even help us change it? The exhibition, “Mind the Earth” will tackle this question with its combination of texts and selected photos from Google Earth.